“What Rules Are You Talking About?” 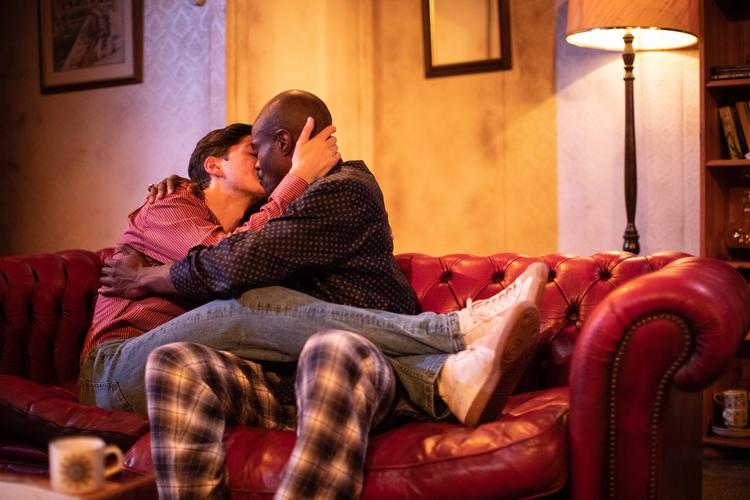 Kevin Elyot’s debut play Coming Clean was at Trafalgar Studios this time last year and has now been revived for a final run. Probably seen as infinitely more daring in its original incarnation, the play is in many respects a conventional tale about relationships, human anxiety and betrayal.

Tony and Greg live together in north London in a semi-open relationship taking full advantage of the hedonistic lifestyle accessible to them. Neither being particularly house proud, Tony sees fit to employ Robert and thus precipitates his own downfall as his partner falls for the young man’s not inconsiderable charms. Tony’s reaction to discovering Greg’s infidelity forms the core of the latter part of the play where the tone of the material changes from comic to something much more serious.

Tony, as played by the excellent Lee Knight, is completely devoted to Greg and would, seemingly, settle for monogamy and security; seems utterly betrayed when Greg succumbs. Knight’s shock and disappointment were superbly conveyed in the last quarter of the play and gave the character much more depth than earlier scenes might have suggested.

I found Greg a far less convincing character. Somewhat cold and aloof he seemed to me even less likely to participate in the sexual freedoms of the era. Stanton Plummer-Cambridge’s performance was fully commensurate with the character as written; the trouble is that I don’t think the character was written very well.

Jonah Rzeskiewicz’s portrayal of Robert grew on me as the play progressed. Starting out slightly tongue tied and apparently naïve it soon became apparent that this “resting” actor had an agenda of his own. Ultimately there was even a slight sense of pleasure revealed in his driving a wedge between his two erstwhile employers.
The two remaining characters in the piece were both played by Elliott Hadley. Firstly, he was an uber camp next door neighbour; latterly he became a German leather clad Village People lookie-likie. Whereas Hadley’s comic timing was razor sharp, unfortunately he had been given clichés to work with. It may all have been very daring in the early 80s but, sadly, it does not quite work now; any writer giving us those sorts of stereotypes in this day and age would, quite rightly, be condemned. That said most of the big laughs of the evening came from the outrageous posturing and acid delivery which Hadley mustered – he was clearly having a ball.
Direction by Adam Spreadbury-Maher was efficient and economical and Nic Farman’s lighting enhanced the varying moods of the scenes. Designer Amanda Mascarenhas’s set was a tight fit in the confines of the Trafalgar studio but had some very pleasing touches such as the red wine stain on the carpet. The costumes screamed early 80s – particularly the 501s and tube socks.

That this was a fledging work from Elyot was quite evident. Starting out as a raucous comedy it took on much darker tones but to my mind never really quite decided what it wanted to be; I found the ending rather unsatisfactory. That said, the play was a good reminder of where the sorely missed Elyot began and a telling portrait of a facet of gay relationships long before such writing entered the mainstream.