An enemy of the people - Review - Playground Theatre 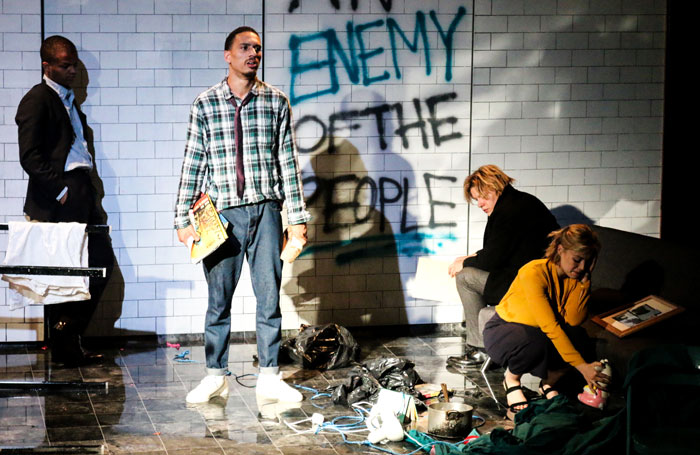 Fringe company Here Now Ensemble, and their director Jolley Goswald, have certainly not shied away from the renewed social and political relevance of Henrik Ibsen’s original play. The dramatic tale of a principled, educated whistle-blower’s life being ruined by a corrupt, self-serving establishment that would rather profit from wilful ignorance of an imminent danger to the local community does indeed seem grimly topical in our modern, post-Brexit ,‘sick of experts’ political landscape, and the company’s very deliberate decision to perform in a venue literally down the road from Grenfell Tower places the writing within a chilling, morbidly timely new context.

It may have been enough, under these dire meta-fictional circumstances, simply to stage the original work and leave the audience to infer the modern meanings for themselves; but theatregoers expecting to arrive to a straightforward adaptation of Ibsen should leave their expectations in the foyer and prepare for an almost entirely new version of the play, one rewritten from the ground up to embrace modernity, and unafraid to explicitly name the problems of Brexit, austerity, capitalism and anti-feminism. Together with the production’s distinctly Brechtian fourth-wall-breaking sensibilities – its cast of characters named for their real-life actors, and lead Hannah van der Westhuysen explicitly halting the action to address the audience as participants, and state aims of using theatre as a forum for political engagement and calls to positive action - little remains here for fans of Ibsen but the bare-bones of his faithfully recreated plot, construed in an almost improvised, vulgar stream-of-consciousness by a talented and capable cast of performers with a strong stage presence. Purists may balk to find everything so changed, but it is a bold, fascinating approach to the text nonetheless.

Goswald’s direction is full of laudable confidence in his vision and together with his actors he manages to never lose a refreshingly naturalistic, fast-paced feel and an engaging atmosphere which is always a pleasure, although it is not an approach that always works textually. At times, dialogue can feel a little too improvised, as though cast members are stumbling for where to go next, and perhaps, like Ibsen’s Thomas Stockmann, the writing’s great flaw is that it can sometimes be too upfront in its desire to tell its truths. One scene in particular, although very well performed by an energetic and impassioned Gabriel Akuwudike, veers perilously close to ludicrous soap opera melodrama that it can be difficult to take seriously, depending on one’s sensibilities. That said, at other times, when it works, there are genuinely great, pacey moments of compelling and affecting human drama that are well worth admission. It makes for something of a mixed bag, but one in which everybody is likely to find things they enjoy.

It runs until 23 July