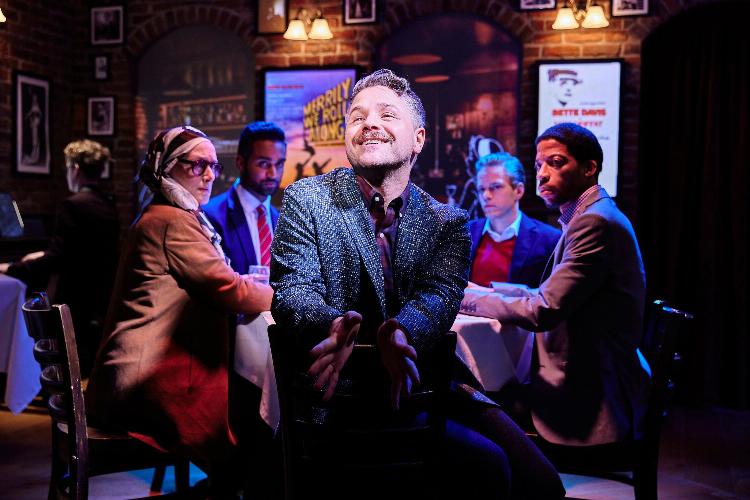 Steve is the portrait of a group of long time, theatre-loving friends as they navigate the many facets of midlife and mortality. Is my partner cheating on me? Why my best friend has cancer? What am I doing with my life? Am I still attractive?

Two middle-aged gay couples are at the centre of the action: Steven (David Ames) with his partner, the lawyer Stephen (Joe Aaron Reid), who have a young son, and the estate agent Matt (Michael Walters) with his partner Brian (Giles Cooper). The group is completed by Esteban, an Argentinian waiter and dancer (Nico Conde) and Carrie (Jenna Russel), a lesbian friend, who gives some heart to this play. On the stage, also a piano, played brilliantly by Ben Papworth.

Steven thinks his partner might be cheating on him: in fact, he has been trading sexts with Brian.

The questions raised by the play are serious, because the characters confront their middle-age crisis and the realisation that their lives are not what they hoped them to be. But “Steve” is a joyful play, and the brilliant cast make a great job with the fast-talking comic dialogues and wonderful interactions, although I was lost in the too many theatre citations.

Steve is an enjoyable show that doesn’t go too deep beyond the surface, and the emotional exploration is not compelling, but at the same time offers relatable characters especially for the gay theatre-lover community.

Seven Dials Playhouse is a rebrand of The Actors Centre. Following an extensive overhaul of its programming structure and business model, the new 100-seat venue is the West End's home for the development of professional theatre and artists.

Photo: The Other Richard