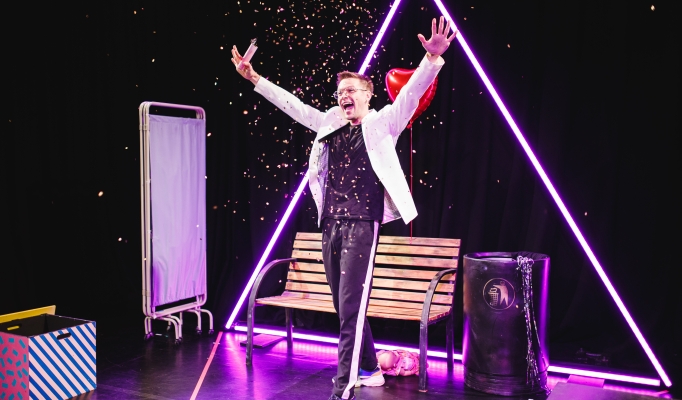 ‘First Time’ explores the story of Nathaniel (performed and written by Nathaniel Hall) as he recounts teenage-hood memories and shares his story of his young sexual awakening.

The play begins light hearted and interactive, with Hall moving between the audience as everyone filters through the doors. The auditorium is set up like a jazz club, with small round tables and wooden chairs. Soon, the play begins, with Hall talking in a personable manner and addressing the audience as though one would address a friend. The stage is littered with props and things, boxes, clothes, a screen… four literal letters hanging from the ceiling spelling out ‘HOPE’.

Hall takes us through his wild night out in Islington the night before, filled with drugs and sex and everything you would expect from a twenty-something year old. The light-heartedness carries through to his teenage-hood memories of his first date at prom and subsequently, the lead up to his first time.

Between the plot, there are moments where Hall would further the interactiveness between him and the audience. There was a (socially distanced) prom dance with an audience member, a fun picture game and an emotional video screening that certainly highlighted the importance of the play’s topic.

Despite this, it was quite difficult to hear all of Hall’s speech, as the auditorium was full and the projection was just a tad too weak amongst the space and the moments of music. Unfortunately, a catalyst of this was a struggle to follow the plot and understand the structure of the play.

Overall, ‘First Time’ sheds light on a very difficult and heart-wrenching topic, with some very beautifully touching moments. However, the projection posed an issue for following the plot points and Hall’s hesitancy (whether it was a character choice or not) creating a slightly stilted pace.

‘First Time’ will be running until 13th February at The Pleasance, London N7 9EF and it then continues on its UK tour.