When the mind finds its resting place 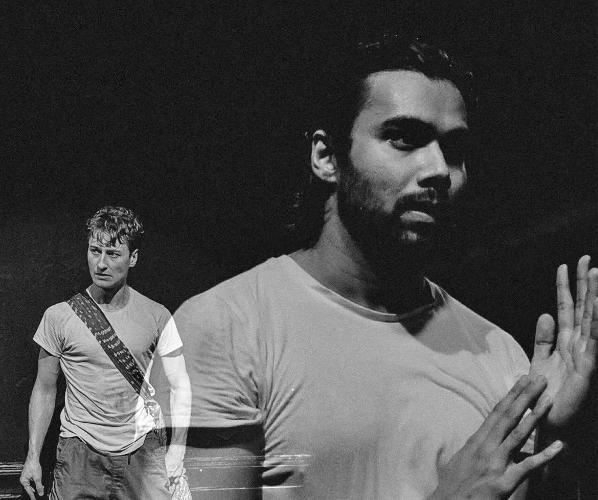 In the middle of bustling Hammersmith is Riverside Studios, the peace of the water at odds with the urban jungle is very much akin to tonight’s show, Samaadhi a retelling of the slaying of peaceful protestors under colonisation by the British in 1919.

This two hander opens in quite an unnerving manner; there is no introduction to the tone of the show just collaborative contemporary dancing, the two bodies in complete union, tearing at each other and then seconds later, jostling to be apart which whilst delightful to watch (and here a firm nod must be given to the choreography) still made little sense.

Novak certainly exhibited the characteristics of General Dyer and Mathur perhaps one of the 20,000 caught in the crossfire.

The staging and set consist of a black curtain, a crooked walking stick, a wheely suitcase and a scarf all widely utilised but nonetheless painting a very bleak picture, the stick used as a gun, the scarf being wrapped around the face et al. Make no bones, the subject matter is grim and its a story that should be retold and whilst Sammadhi is a bold try it doesn’t quite triumph.

Ivanity Novak is the writer and one of the actors of the piece and at times it feels like there is rhyme galore but no rhythm in such a short show (60 mins) There wasn’t enough time or explanation to be able to flesh out the writing or acting.

Mohit Mathur stakes his claim with fervour; stating what happened in the Jalianwala Bagh Massacre in the holy city of Amritsar in India ‘at times I could taste the blood in my mouth’, he shows flickers of empathy and pain but it abruptly ended in almost fitful bursts. One such conversation when he addresses the WhiteWolf felt almost nonsensical, such as it was long and rambling.

Both actors characterise with prestige however there is little substance to allow them to stretch their theatrical limbs. The text is jumpy, it moves at a speed that does not allow the audience to keep up with or understand how conversations intermingle. There are versions of text that don’t work well together, poetry falls in with almost Shakespearean prose which again doesn’t meld together. It was reminiscent of throwing everything at the wall and seeing what works stick, work it does but needs to be vastly improved upon.

Given that Samaadhi is a work in progress it would benefit with a Director who would be able to breathe into this piece of theatre which in turn would allow it to come to life fully and thus be given the opportunity to retell the story in all its horror. With a little attention paid to the nuts and bolts of the story, a lot more could be achieved.