“I meannn I’m basically a man now, I’ve got pubic hair. Do ya wanna see!?” 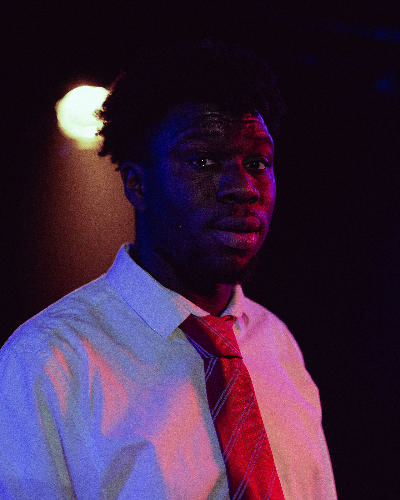 Temi Majekodunmi brings their one-man show to Soho Upstairs at Soho Theatre and has the sold-out audience cringing, laughing and shedding a tear throughout the sixty-minute monologue performed by the writer himself. We meet Olu, a teenage boy with big dreams of getting out of his estate in which he feels trapped in. Majekodunmi takes us through a hilarious journey of Olu’s understanding of manhood, getting through the school day, fantasising about Kelly Rowland and figuring out that semen doesn’t in fact make your facial hair grow faster…

The play deals with a wide range of themes, including racism, mental health, street violence and police brutality which are articulated extremely well in the writing, importantly highlighting the fact that these issues should not be sugar-coated. In balance to this, audience members are crying with laughter as Majekodunmi smoothly and hilariously multiroles into other characters, such as the annoying popular girl in school, and that teacher who always mispronounces his name, shortening it so it is ‘easier’ for them to address him.

Although the writing is strong, it feels as though this strength is lost in the performativity of the piece due to what feels like a mismatch of styles which do not smoothly align. Moments of physical movement, mainly in scene changes, are not sharp enough to feel necessary with the script. At points, this causes intimate moments engaging the audience to be disrupted, and not by artistic choice.

While aspects of the piece feel underdeveloped in the rehearsal room, Majekodunmi brilliantly presents a teenage boy with a smart and witty attitude, effortlessly plays on the moments dark humour in the text, and hilariously presents the innocence of a curious young man going through puberty. The play’s intimate nature of delivery suits the space perfectly and Majekodunmi engages well with audience members across the room with its thrust staging, not only addressing those ahead of him. Even though a little underdeveloped physically, this play could have a bright future ahead of itself, especially after the successes it already has under its belt. Temi Majekodunmi is one to be watched.

Link to ‘The Life of Olu’ here.