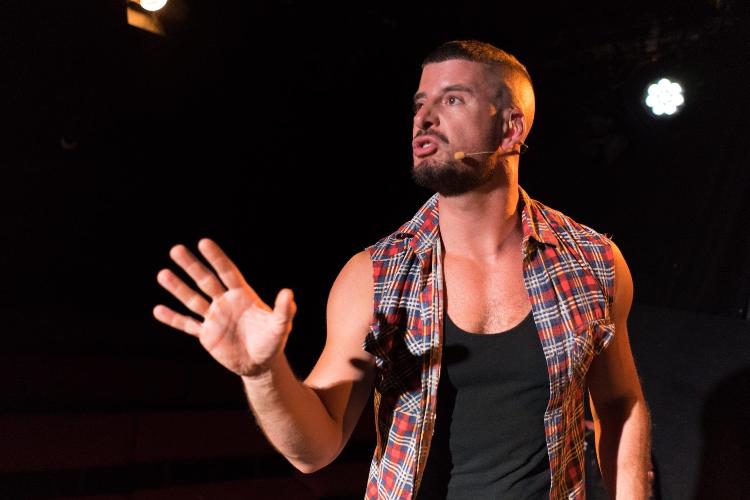 Filmed at the Hackney Empire after a tour of the UK and a run on West End, The Riot Act is a solo show written and performed by Alexis Gregory and directed by Rikki Beadle-Blair MBE. It has been reimagined to fit the screen in order for it to be available to a wider audience. The play is in three parts, each the story of actual people that have lived through some of the most pivotal moments in queer history. Gregory performs three consecutive monologues formed word-for-word from interviews with three individuals.

First up is Michael. As a 17-year-old boy, newly arrived in The Big Apple, he found himself in the middle of the Stonewall riots in Greenwich Village in 1969. By telling that particular story, he also tells the story of how one absurd raid turned out to be a necessary call to action, eventually leading to the tradition of the annual Pride Parade that we know today. The second story is that of Lavinia, a drag queen from Hackney. Their recollection tells the story of how drag evolved through the ‘70s and ‘80s. By allowing the text to be extremely specific and personal, Lavinia’s story becomes surprisingly generalisable and most audiences will probably view drag in a more nuanced way after this. The final story, Paul’s story, is much more well-known and, frankly, much more heart-breaking than the two that went before. It is about the AIDS crisis and the cumulative grief it left in its wake. He tells the excruciating story of how he lost the majority of his friends to the fateful disease, and how it led him to become an active part of the gay rights movement.

It is no small feat to make 70 straight minutes of dialogue feel interesting, but Gregory’s ability for storytelling is so ensnaring that the minutes pass unnoticed. Each character that he embodies has a unique voice and body language, which is effortless and charming in his portrayal. Creatively, choices are made, especially at the very start and towards the end, that give the performance a more movie-like quality. The play opens backstage in the dressing room with Gregory as himself going over the lines and getting warmed up and ready. His jittery excitement and focus give the audience the chance to get settled as well in instead of the usual cold opening on stage. It also makes apparent where Gregory the performer ends, and where the characters he is about to embody begin.

It is a bit of a shame, however, that the team has not put a little more effort into the visual outlook of this show. For a play called Riot Act, it is not very riotous even if the subject matter is. Whether it be budgeting or creative preference it seems to be somewhat lacking that extra touch of drama, which would have just elevated the performance to an even higher level than it is already at. That being said, there is also a quiet quality to letting Gregory and his three characters be not only the main event but the only event. It does at least make sure that their voices are not drowned out by the noise of a loud production design.

No matter your age, orientation, gender, nationality, or shoe size, be sure not to miss this spectacular, enlightening performance. It is practically handed to you on a silver platter now that it has been filmed, and it will definitely leave you wiser than it found you.