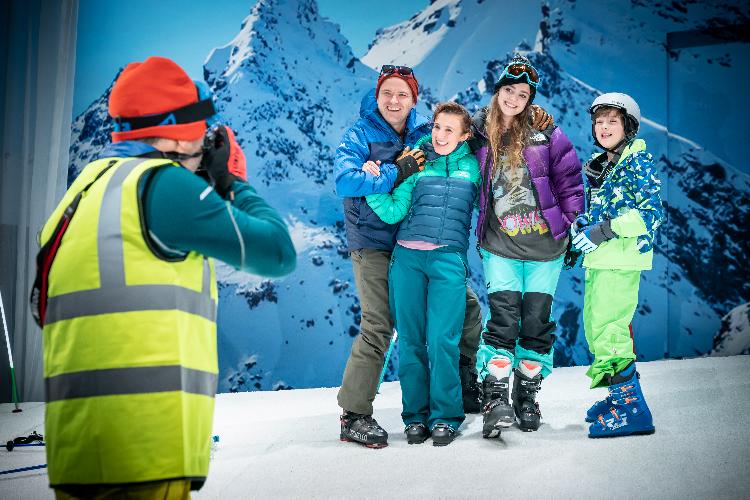 Ruben Östlund's Force Majeure film in 2014 was a reflection on relationships and trust. The ski slopes that it was set in echoed the mountains that one climbs and falls down when self-discovering in a marriage. Of course, the movie was filmed on ski slopes, in a ski resort. Even if the majestical atmosphere and metaphors from the film are lost in the small space of The Donmar, Force Majeure is an entertaining evening.

Michael Longhurst has made some clever calls on comedy, satire and the outbursts of movement emphasise the thrill of the location.

Tim Price’s adaption is as apparent as it needs to be to translate well on stage. It is in fact funnier than the film and fast-paced. It's an enjoyable show, but some of the scenes feel too short, and some others, such as the drunken fight, seem unnecessary. The end result of the play falls slightly flat and doesn’t feel like a full stop, however, it is a strong attempt at a complicated storyline.

The cast are stellar. Lyndsey Marshal and Roy Kinnear make the perfect miserable couple ‘Ebba & Tomas’. Every comedic and romantic nuance has been crafted wonderfully by Michael Longhurst. Florence Hunt is an exceptional young actress, her delivery adds to the tension rising in scenes.

We can see the marriage is only on slightly shaky grounds until a disaster strikes and Tomas responds by running away. The shaking of the theatre accompanies very well the crumbling of Tomas and Ebba's marriage. Ebba and the children don’t trust the man of the family and Tomas begins to fall apart. We question if he ran away out of fear or selfishness? We are served further moral judgment with Nathalie Armin who plays a convincing liberal hotel guest. We also meet Tomas’s old friend Mats (Sule Rimi) and his high-spirited younger girlfriend Jenny (Siena Kelly). Siena Kelly has comedy bones as Jenny plays into Mats ridiculous bedtime talks.

The staging between scenes feels blocky and clunky at times but this is to be expected with the demands of the set. The ensemble carry parts of the show and offer a unique skill set in the form of skiing across the stage.

The slopes that Jon Bausor has created in the set are very impressive. The elevator is so cleverly done. Lucy Carter has lit the carpet cladded snow beautifully. With the split blocking in the show, the believability of the location is going to come up for the audience at times, but it quickly becomes unimportant because the actors convince us they are there. Sasha Milavic Davies deserves special acclaim for movement direction on this piece. The use of skis, choreography and freedom of the bodies on stage is joyous to watch.

Whilst delivering a spectacle, the Donmar has stylishly delivered this thoroughly silly piece of text with deep undertones.

It runs until 5 February.