When Friday night comes along, Ben knows it only means one thing – staying with Granny 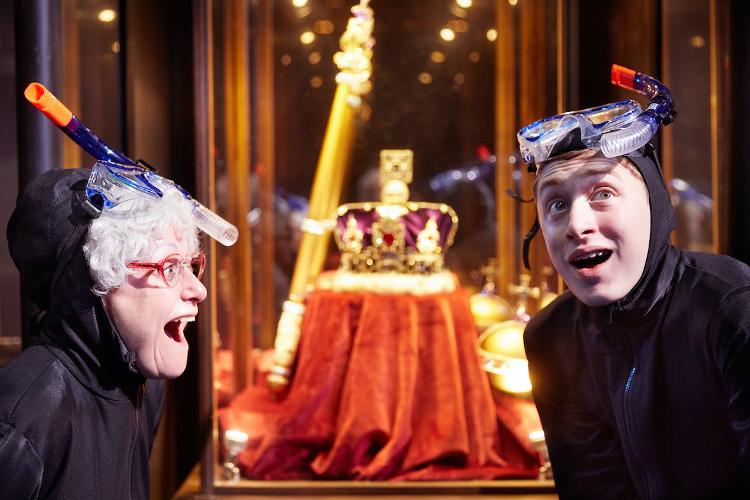 There was plenty of laughter and some tears too in this absolutely spectacular and entertaining adaptation of David Walliams’ Gangsta Granny.

From beginning to end, it had everything, comedy, dance, action and suspense, leaving both my seven-year-old niece and I wanting more.

Friday nights might mean fun and frolics for Ben’s dance-loving parents (Jess Nesling and Jason Furnival) but it means a forced night in with his cabbage-loving Granny (Isabel Ford).

In true teen style it’s “sooooooooooooooooooooo boring”. But this all changes when Ben stumbles across some treasure hidden in a biscuit tin which makes him realise there’s more to Granny than just cabbage soup, trumping and her mobility scooter.

His desire to become a plumber sets off an elaborate plan to steal the Crown Jewels from the Tower of London with his Gangsta Granny.

Meanwhile, he’s been roped into a dance competition by his parents on the same night. It’s like Strictly, but it’s not, but it’s a brilliant addition and a really fun side-step as Flavio (Irfan Damani) plays the eccentric host.

I loved how the intergenerational gap was highlighted in this show because it was so realistic and so endearing when you see the two being thick as thieves – excuse the pun!

This extravaganza has been adapted by The Birmingham Stage Company – it’s not the first time I’ve seen one of their productions and once again it did not disappoint. And the top credit comes from David Walliams himself who says it’s “…so much better than the book!”.

Hats off to Jacqueline Trousdale too who is the set designer. The stage looks simple enough, but as the scenes go on you see how cleverly it’s been put together. A quick song and dance by the actors between scene sees them turning the set, pulling things out in one scene to reveal one thing, pushing them back in another so they become something else. I love space saving and it was like watching a embellished version of an Ikea advert.

I was put off when we were first introduced to Raj (Irfan Damani) quite early on in the show. He plays the stereotypical Asian man with an Asian accent who runs the corner shop, but then as this show unfolds it’s obvious to see that this production is a celebration of accents.

This was a superb adaptation that was executed brilliantly. I might not have read the book but my niece has and she told me Gangsta Granny the show was even better than how she had imagined it in her mind.

And I’d definitely recommend the souvenir programme too – it doubles up as a clever activity book for your little ones.

This is a must not miss production at London’s Bloomsbury Theatre and Studio – it’s on until the 9th of January.