A hilariously outrageous adaptation of the classic A Christmas Carol 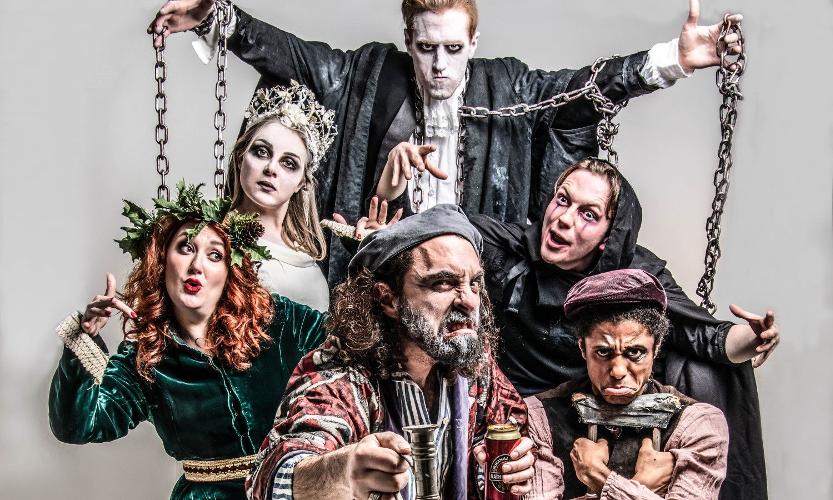 Shitfaced Showtime, part of the Shitfaced Shakespeare family, is back at the Leicester Square Theatre causing drunken mayhem and hilarity in their latest production A Pissedmas Carol.

Their unique adaptation brings the classic A Christmas Carol into the 21 st century through the use of witty gags and seamlessly embedded Christmas classics. Showing off the talents of Musical Director, Charlotte Brooke, you hear familiar songs by Wham!, E-17 and Slade, as you can’t help be impressed with the uniquely adapted lyrics encouraging you to sing along and soak up the spirit of Christmas.

The brilliance of Shitfaced Showtime is that every show is different; you never know what you’re walking into. The concept is simple. Four hours before the show the cast come together for a pre-show party and one of the cast members gets sloshed. The show starts with the compere, John Mitton, setting out the rules so that everyone knows what to expect (although they’re more like guidelines really). The audience is encouraged to participate with all the gags you can expect from an R-rated panto with a few additions to ensure the cast member stays inebriated throughout the show. Then it’s on with the show, with one key principle, go with whatever the drunk actor decides to do!

The audience is initially captivated with identifying the drunken cast member ASAP and for our performance, we had the pleasure of a shitfaced Scrooge (played brilliantly by James Murfitt). In this unique adaptation Scrooge decides to enrol the help of agency staff Gavin so that he can give his staff the time off for Christmas. Scrooge is then accompanied by the 3 Ghost of Christmas’ as he embarks on an adventure that for us led to crude remarks, inappropriate touching, and hilarious nit- bits about the actor’s life, rather than Scrooges. James Murfitt is brilliantly funny and keeps you on the edge of your seat waiting for what he’s going to do next, from sucking the fingers of the Ghost of Christmas future, to shooting Bob Cratchit (beautifully performed by Hal Hillman), having learned the true meaning of Christmas is killing your enemies.

Running for 90 mins, or thereabouts depending on how far off script the shitfaced cast member goes, the show is perfect for a fun night out if you’re open to the unpredictable nature, crude humour and hilarity that unfolds as the inebriated actor really is left to their own devices. Kudos to the other cast members (Katy Baker, John Mitton, Issy Wroe Wright, Hal Hillman, Will Seaward, Daniel Quirke, Charlotte Brooke and Nick House in rotation across performances) who seamlessly act around them and keep the show moving! What fun!

Although this show is expertly executed it’s definitely not for the faint-hearted and some would find it offensive. Having said that, if you’re up for a bit of tongue and cheek humour and enjoy observing drunken antics then you won’t be disappointed by this show! In fact, you’ll leave with a great big smile on your face and a belly full of Christmas spirit.

Suitable for 16+ only, Shitfaced Showtime’s A Pissedmas Carol runs until 15 January 2022.