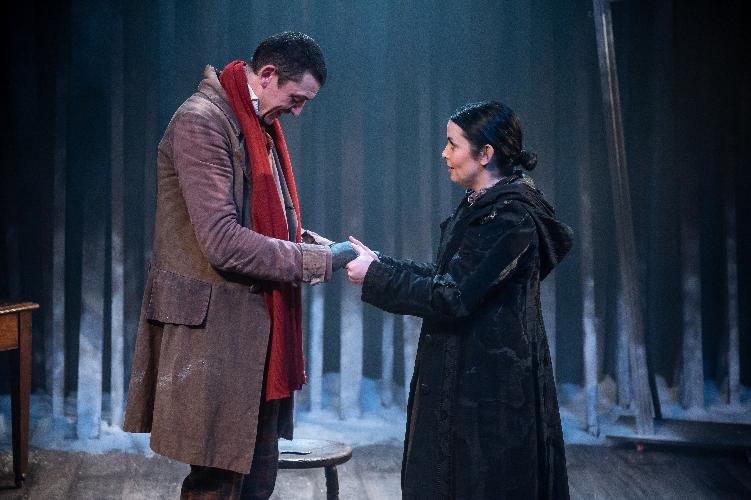 It is Christmas Eve, and, as you know, Ebenezer Scrooge is hard at work in his office as if it had been any other day of the year. In this version of A Christmas Carol, the audience is never let beyond the front room in which we find poor, hard-working Cratchit – also hard at work – anxious to get home to his wife and family. Even from Cratchit’s perspective, there is nothing new in Scrooge’s gruff dismissal of his nephew’s dinner invitation or his treatment of the two men at the door, collecting for a charity. It is new, however, that the two men were actually crooks trying to convince Scrooge to give money to their fake charity. Cratchit, it turns out, met them the night before at the local pub and was easily persuaded to join in on the scam. This ill-advised alliance turns out to be the starting point of a dramatic night for Cratchit, who, when the night is over, will also have been visited by the three ghosts of Christmas.

John Dagleish, who has previously played the titular character in The Old Vic’s production of A Christmas Carol, takes on the role of Bob Cratchit opposite Freya Sharp as Martha Cratchit. Between the two of them, they also play around half a dozen other characters. Sharp carries the majority of that load and does so beautifully, but it is Dagleish who truly amazes. He effortlessly slips in and out of his own character, that of the menacing Scrooge and the tyrant, Threadneedle. He plays Cratchit with heart and earnestness, and it is an absolute treat to watch his and Sharp’s snappy interactions.

When Cratchit is visited by the ghost of Christmas present it is with underlying themes of war and the sound of airplanes flying overhead, steering thoughts toward the First or Second World War. This makes the time frame of Cratchit slightly confusing, as costumes and scenography clearly place the story somewhere in the middle of the eighteenth century. It is, however, of no great importance to the story, and it is both amusing and frightening as Cratchit experiences a (to him at least) futuristic late nineteenth-century London with its glittery, hedonistic parties and the pitiful people looking down from the windows, unable to join in.

Alexander Knott’s re-imagining of the events of one fateful Christmas Eve turns out to be a beautifully paced two-hander with rich writing and excellent acting by Sharp and, in particular, Dagleish who will be sure to have your rapt attention throughout. Knott manages to balance humour and severity, by weaving in funny little lines and jokes, thus adding a nice light-heartedness without it ever being overpowering to the moral of the story. In short, it is a December evening well spent and a refreshing take on an old classic.