A a journey across space and time 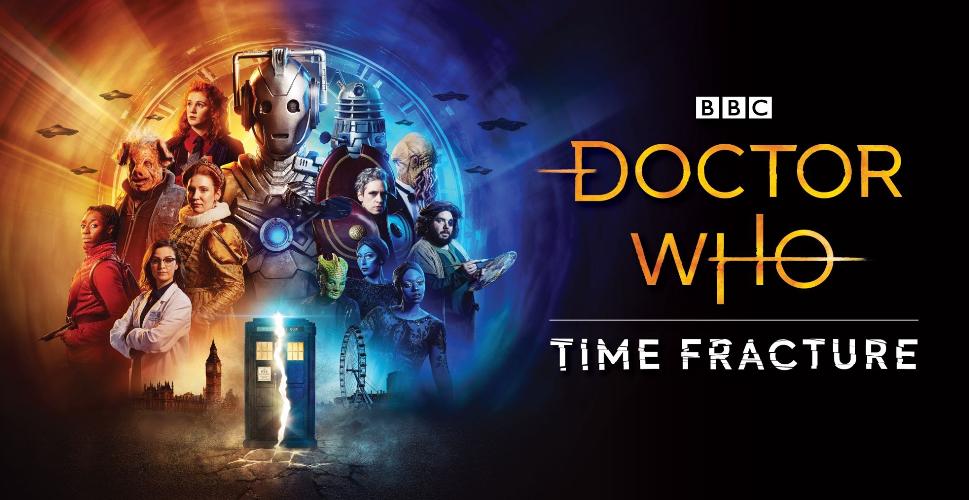 “The first rule of Time Fracture is that you don’t talk about Time Fracture”. So says Jodie Whittaker’s Doctor when she pops up at the end of Immersive Everywhere’s relaunched interactive experience. That’s going to make for an interesting review then…To be fair I can absolutely see the point as any spoilers are likely to diminish the enjoyment and in any case my experience definitely won’t be your experience as this is the sort of theatre where you go to it rather than it coming to you; no two people are going to follow the same path throughout.

The premise (I think I’m allowed to go that far) is that UNIT have discovered a destabilisation point in time and been monitoring it for fifty years. A point of final crisis is approaching, and the Doctor has proposed the audience members as volunteers who will act to get everything back to how its supposed to be. Thus begins a race through space and time visiting 17 locations in order to solve riddles, puzzles and games and interact with characters from the Whoniverse before a final confrontation on a planet that fans of the show will know well.

It’s a totally bonkers outing – mostly in a good way – although the narrative itself is thoroughly confusing with far too many elements thrown in and no clear indication of how they are all connected. In a half time discussion with a colleague, it was evident that both of us had missed some important elements in the middle section, me a visit to one of the show’s spin off locations and he a chat with one of the many alien life forms which pepper the show. Not that this matters in the end and if you’re really desperate to see and hear all, then it’s a good incentive to return.

What is unquestionably fabulous is the whole area of design where imagination runs as free as for the TV series. Costumes, some on loan from the BBC, are right on the button and the make-up stands up to really close scrutiny. The settings while retaining some of the shonky quirkiness of the originals are cleverly done with delightful “Easter egg” touches meaning you have to look really closely at everything particularly any paintings or tapestries. The lighting too is brilliantly done with Terry Cook’s designs creating some wonderful effects. There’s a close encounter in a dark corridor which will definitely have you jumping out of your skin and is probably the show’s stand out moment.

While I really enjoyed some aspects of the event it probably wasn’t as much as I’d hoped/anticipated largely because of the incomprehensibility of a lot of what was going on. While this was partly down to the script it wasn’t helped by being quite so loud and frantic for a lot of the time. The first section particularly seemed to consist of a lot of people in white lab coats shouting and getting upset with each other although it wasn’t always clear why. Perhaps I’ve just reached that sort of age. After all I can remember distinctly watching that first ever episode way back in November 1963 – now that really is time travel!

The show is booking through to April 2022