The hit musical returns this Christmas 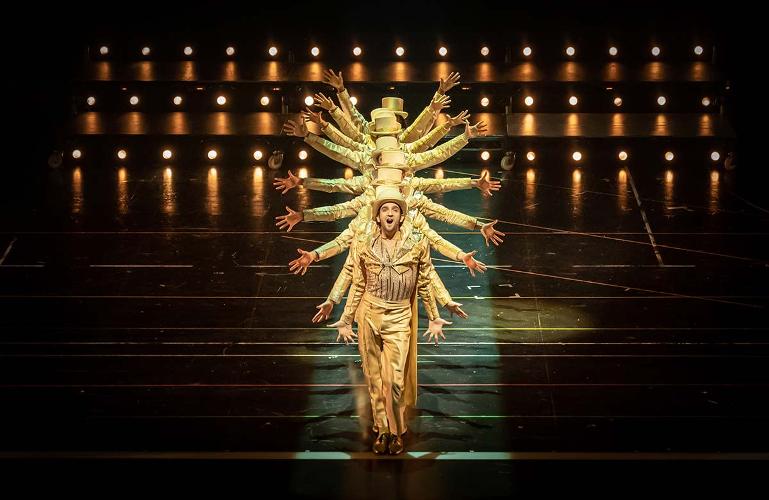 For audiences looking for something other than pantomimes to watch during this festive season, Leicester’s Curve are offering up a new production of ‘A Chorus Line’ which opened at the venue this week.

With its classic score by Marvin Hamlisch, the 1974 American musical transports us to mid-70s New York, where director Zach (Adam Cooper) has assembled a large group of dancers to audition for his next show. After the first round of cuts, Zach works down the line, wanting to know more about these hopeful performers before making his final casting decision. Among the women trying out is Cassie, a former professional dancer trying to get back into the business, and an old flame of Zach's.

Under the consistently assured direction of Nikolai Foster, Curve’s production is a great night out.  Wisely running straight through with no interval, Foster maintains a quick pace and ensures clock-watching stays at a minimum.  For a show that could be reduced down to 'a bunch of people standing in a line', 'A Chorus Line' is a far richer and more satisfying experience. Curve's stage is opened up to its fullest, letting the audience see into the wings and up into the fly space. It gives the space an almost overwhelming quality and looms large over the performers below: perhaps a deliberate choice to symbolise how small they are in comparison to their dreams and the size and weight of the theatrical world that they want so desperately to be a part of. Five vertical mirrors are placed at the back of the stage which catch reflected light and movement during the dance numbers, adding depth and texture, and lighting is also used excellently (most notably during the 'One' finale sequence, where the lighting rig deserves its own round of applause). One less successful staging choice is that of having a live camera feed providing close-ups of the characters during monologues and transmitting them on a big video screen. This doesn't really add anything to the scenes for the audience and is more of a distraction than anything else.

‘A Chorus Line’ brilliantly illustrates the gruelling processes that dancers go through for a chance of doing what they love on a theatrical stage, to be part of an industry that will inevitably chew them up and spit them out when their expiration date arrives. It's a gloomy outlook as the auditionees realise their dream job comes with a limited shelf life, and they may have to look beyond their stage careers sooner rather than later. In such a physically demanding job, age isn't their friend and threatens to take its toll: Val deliberately muffles that she's 'twenty...(something)', and Sheila exclaims 'I'M THIRTY' in the same horrified tone as if she were declaring she only had two weeks to live. They hear the sound of clocks ticking more loudly than any orchestra could ever play, and yet all they want to do is be bathed in that spotlight, for however briefly it shines. There's also an almost cruel irony that the performers have to show their individuality (and by extension their vulnerability) in order to be chosen, but the finalists then become just one member of a chorus line barely distinguishable from each other. They do it all, as the penultimate song says, 'for love', of dance and of theatre. It all strikes a bittersweet tone throughout and is really well delivered. This isn't a show about making it big, it's about simply making it through, and being able to stand out from the crowd just enough to earn your shot.  It's a show about characters and stories. Audiences expecting lavish set pieces, costumes and pyrotechnics won't find any. Instead, we are taken into the lives of our hopeful performers as they bare their souls in an attempt to gain Zach's approval. They are given backstories that make the audience care about them, and their individual songs are at times poignant and heartfelt, uplifting, or just downright sassy in the case of “Dance Ten, Looks Three” (brilliantly delivered by Chloe Saunders).  For a musical just 3 years away from its 50th birthday, 'A Chorus Line' remains tuneful and catchy, its 70s roots still detectable in Hamlisch's score but without making the piece feel dated. 'One' closes the show with an earworm of a tune that refuses to leave your brain for days, while “At The Ballet” (said to be Hamlisch's personal favourite of his own compositions) remains beautiful, elevated further by some stunning money notes from Charlotte Scott as Maggie.

Foster has assembled a wonderfully diverse and eclectic cast, which is fantastic to see.  As is inevitable with such a large cast, some performances are stronger than others, with some of the acting a tad on the broadside, and the odd dodgy American accent. Lizzy-Rose Esin-Kelly does well as Diana, particularly in her song “Nothing” as well as taking the lead in “What I Did For Love”. Ainsley Hall Ricketts gives a skilled and touching monologue as Paul, a young gay man estranged from his parents, that slowly breaks the audience's hearts as he breaks down on-stage. Carly Mercedes Dyer also makes for a fierce Cassie, showing steely-eyed determination throughout in her attempt to make the cut, and performs the heck out of “The Music And The Mirror”. Dyer's dance moves match her vocals, and she owns the stage during her spotlight moment. Dancing is uniformly excellent throughout the cast, and the group numbers are creatively choreographed with excellent energy. Special mention must go to Redmand Rance (Mike), who moves like an absolute dream and is a joy to watch.

At times this production feels a little too contemporary, seemingly forgetting that it's set in 1975, and more could be done with costumes and hair to give a more consistently authentic representation of that time. There are some moustaches and legwarmers on show, but not quite enough. The costumes for the final sequence are excellent though, as our bunch of hopefuls are turned into a group of gold-plated Rockettes with top hats and tails, and perform glittering high-kicks as their lives depend on it.

'A Chorus Line' ran for 15 years on Broadway (1975-1990) and held the record for the longest-running show until Cats overtook it in 1997. To date, it remains the 7th longest-running show on Broadway, a title it is in no danger of losing for a while. The show is hugely significant in American theatre, a wonderful insight into the casting process, and a love letter to ensemble performers everywhere. They may not get star billing or final bows, but they are the lifeblood of the industry, and 'A Chorus Line' gives them their moment to shine. With it, Curve have yet another wonderful production under their belts.