Dear friends, can you help me fundraising my funeral? 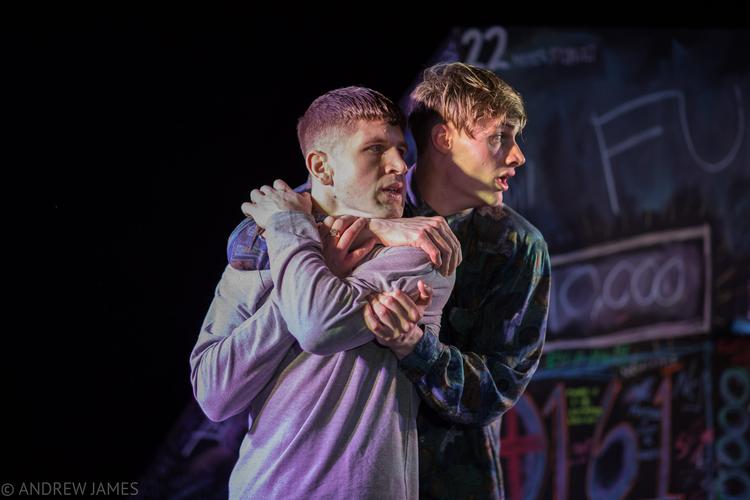 22-year-old Mossy suffers from depression. He is not happy. He had not been happy for the last two years. His emotions don’t go up, they don’t go down. They won’t go anywhere. Life is unbearable for him, and he decides to put it to an end.

But he has not enough money for his funeral and does not want to leave his mother to pay for that (after all, funerals are expensive). So, with the help of his three friends Kane, Jack, and Matt, he starts fundraising. His friends are initially shocked and of course, they don’t want to help, but then they start to get along with the idea and try their best to help him out.

Digging deep, by Amy Guyler and directed by Alistair Wilkinson, is a play that wants to talk about male suicide. And in fact, it is supported by Lambeth Council, CALM (Campaign Against Living Miserably), The Andrew Lloyd Webber Foundation and is part of Let's Talk @ VAULT Festival with Guy's and St Thomas' NHS Foundation Trust.

The chemistry between the four actors is very natural. Kyle Rowe is Mossy: he has tried his best to win his battle against this darkness that took over his soul, but now he feels hopeless, disillusioned and wants to make it over. Matthew Woodhead is Kane, Mossy’s best friend: he is the most dissenting opinion of the group, until the end.  Josh Sinclair-Evans is Jack, gentle and helpful to do what he thinks it’s the best for his friend. Jonny Green is exceptional as Matt.

As I wrote, Digging Deep is a play that wants to talk about male suicide, a silent killer in our society, and mental health. And it REALLY does so.

What happens if your friend told you that he wants to kill himself? How would you react to your friend’s depression? What happens if a video about committing suicide becomes viral and gets world-wide attention? What is the answer of society? And, finally, what happens to the people who are left thinking about what they could have done to change the events?

Just Add Milk, the theatre company presenting this play, managed to talk, and somehow answer, to those questions in a fun, engaging and moving hour. And I think this is an exceptional achieve.

Digging Deep is at The Vaults Festival until 24 February