21 Round for Christmas - Review - Hope theatre

Festive spirit and family drama above the Hope & Anchor Pub 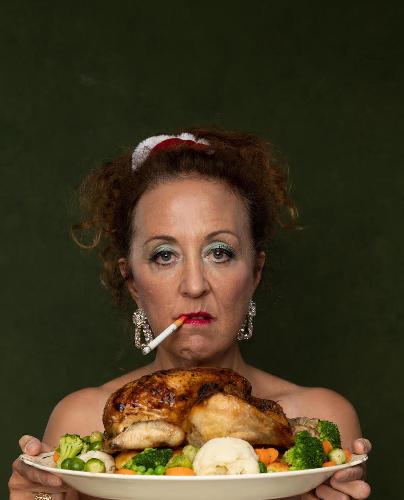 We meet Tracy (Clare Bloomer) in her kitchen. A woman in her fifties, chaotic, dissatisfied and embarking upon the seemingly impossible task of cooking Christmas dinner for 21 people with as many dietary requests. Though at times slightly forced, Clare Bloomer manages to treat the audience to several spells of good humour and witty punchlines. Throughout the play, she keeps the audience engaged by little comments and nods to our existence á la Phoebe Waller-Bridge’s Fleabag. At the same time, she avoids the classic pitfalls of audience engagement which often lead to toe-curling rather than the desired intimacy. She is particularly delightful in little physical moments such as the one where she vigorously sniffs a packet of cigarettes and puffs on a wooden spoon because she is trying to quit.

The tone changes slightly as it is revealed why this Christmas is the first without her friend Jackie there to make her famous gravy. Her absence also explains a lot regarding the sadness that seems to be brewing just underneath Tracy’s cheery exterior. Adding such detail to the story demands careful attention to its balance between tragedy and comedy. While at times excelling at the latter, the former could, however, have done with a bit more space in the story to allow for the emotions to truly settle and take form.

The people on the production team have made a few creative choices with lighting and sound effects. For instance, the kitchen is quickly converted into a boxing ring in a flashback to illustrate Tracy’s dilemma regarding which of the two men she is dating at the time to choose. This is done simply yet effectively by having a square frame of light, half blue and half red, above the stage and lowering an old-fashioned microphone into which our protagonist yells commentary. Each corner lights up and a bell rings as one of the suitors gets a punch in. One point for dinner at the Ritz, one point for helping her mother put up some shelves, and so on.

All in all, this is a safe and digestible fun little single-hander. With its snug location above The Hope & Anchor pub in Islington, 21 Round for Christmas would go well with a few drinks before and is sure to leave you with a smile on your face.

It runs until 18 December. Tickets here.