The magic carpet touches down in Hammersmith 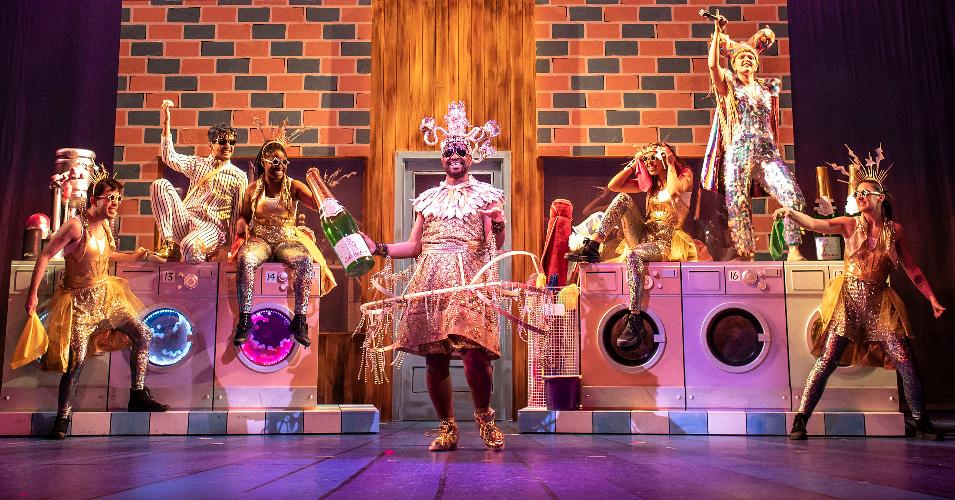 With snow falling in some parts of the country today, it feels like the festive period is finally upon us, which means it is once again Panto season! Following a year of no pantomimes (boo), Aladdin has arrived at The Lyric Hammersmith Theatre, and he has done it in style.

Considering we have not experienced the cheese and joy that pantomimes bring for two years,  Vikki Stone and Abigail Graham throw us headfirst into the most colourful and wonderfully gay opening number possible. This paves the way for a delightful few hours of jokes, songs and gags that could put a smile on even the meanest grinch’s face.

The cast are excellent in their performances, bringing infectious enjoyment to the stage. The star has to be Kate Donnachie who doubles up as both the effervescent Genie and bumbling blonde-haired Emperor. Energy radiates from her and her comedic timing is fantastic, but I do not envy  her quick changes. The singing sensations in the cast are Ellena Vincent and Gracie McGonigal both of whom deliver flawless vocal performances as well as charming the audience as Jasmine and Wishy respectively. Irvine Iqbal makes a magnificently evil Abanazer and relishes in the boos delivered from the audience. He is particularly great in his briefing style scenes with his ‘next slide’  numbers. Qasim Mahmood captures the cheeky side of Aladdin marvellously and Stephan  Boyce’s Twankey is terrific though sadly underused. As a unit, this cast work tremendously well together supported by a talented ensemble.

The overall design of the production led by Lily Arnold (set) and Kinnetia Isidore (costume) is stunning and reflective of Hammersmith and London as a whole. From Twankey’s Laundry (and micro-brewery) to the government style briefing room the detail is delightful. Sally Ferguson’s lighting design helps make the magic carpet scene a highlight in the show. As we see Aladdin and  Jasmine soar above the front of the stage I couldn’t help but smile.

Whilst Panto might not be for everyone it plays a crucial role in serving its local community and bringing people together. This production understands its role and that was evident in the diverse audience, all of whom left with a grin on their face.

It runs until 2 January.