An exciting new original comedy at the Omnibus Theatre 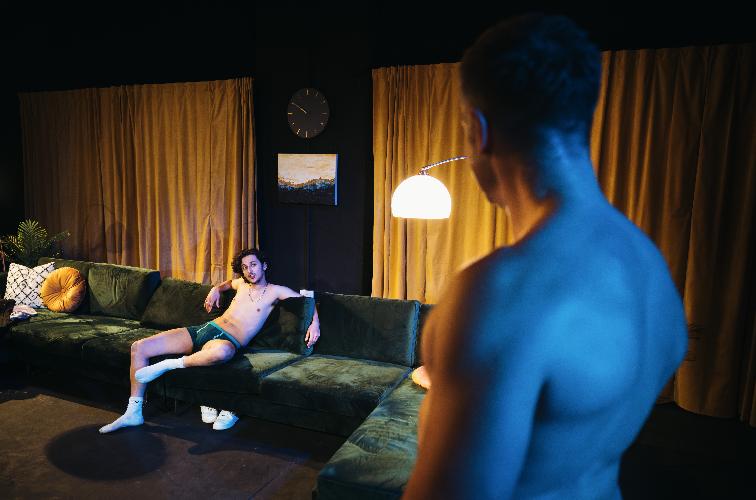 Tom Wright’s script sizzles with wit, danger and vulnerability as this original spin on suburban life takes us down a darkly comedic road.

All set in one room, Natalie Johnson’s set is a character in itself, as a large velvet green sofa dominates the stage. Warm lampshades are placed on either side and the theatre’s back windows are used as part of the living room. It creates the comforting, suburban atmosphere we’re all familiar with. The play opens with Phil (Edd Muruako) anxiously pacing the stage and patting down the cushions in what we later find out is his nervous tick. Quasim (Jonny Khan) then tentatively joins and the two awkwardly interact as we slowly understand what these two opposites are doing together. Phil is a middle-aged man who constantly refers to his ‘dad bod’ and highlights the age gap between him and Quasim - Quasim being a twenty-year-old ‘road man’ with a hint of a middle eastern accent. We soon find out that Quasim is joining Phil and his husband in a threesome as the couple attempt to spice up their sixteen-year open relationship. Despite the lumbering interaction between Phil and Quasim, there is already a hint of something more between the two, something that surpasses the sexual desires. We are soon introduced to Michael (Alan Turkington), an energetic, fitness fanatic who bundles onto the stage filled with fiery lust and a thirst for excitement.

As the three gear up to play out their sexual fantasies, Tom Wright’s script doesn’t hold back. Even the physicality of these two larger, older men and the small, evidently vulnerable Quasim is unsettling. However, the tables are soon flipped as we watch Quasim’s sly manipulative tendencies play out over this kind, trusting gay couple.

Very Special Guest Star explores the prejudices and expectations of gay men thriving in a middle-class environment and the yearning for something more than their comfortable, seemingly perfect lives. Their dissatisfaction paired with the guilt and fantasies that riddle the two create a plethora of dimensions to these characters, making for an incredibly loveable, flawed trio. Quasim’s plotline as the unwanted, undocumented refugee is a wonderfully topical exploration into the trope of the abandoned child and what happens when they never find the home every child deserves.

Rikki Beadle-Blair’s direction is flawless, as the pace of this hour and a half long play never falters.

Very Special Guest Star is a darkly original piece that enthrals from start to finish. The three actors have fantastic chemistry, making every second believable. Some moments feel slightly awkward and rough around the edges, but it doesn’t stand in the way of what is a truly provoking and funny story on race, class and the bigotries of a middle-class society.