A farcical tale of aristocracy versus the working class 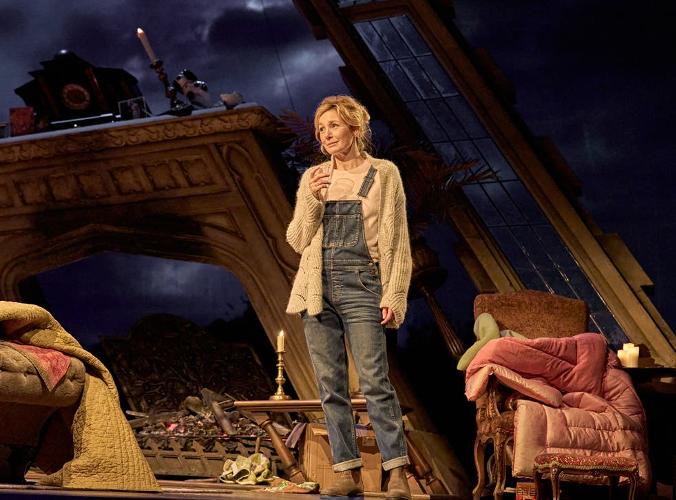 Moira Buffini's dark comedy begins and we are plunged into darkness, the sounds of a storm and lightning emanating around the auditorium. As the lights come up, Lez Brotherston’s set is lit into life; a clutter of trinkets and scrappy armchairs lay within the Manor’s enormous living room. There was some hope that these background items (for example, an ominous looking suit of armour) would be relevant later on in the play but it seems they were only used to display the status of the house owners. Diana (Nancy Carroll) and her former rockstar husband Pete (Owen McDonnell), live inharmoniously in this run-down manor that is crumbling as rapidly as their rocky relationship. Their daughter Isis (Liadan Dunlea) is frantically trying to keep her parent’s relationship afloat and trying to make sense of the family dynamics. All the while, a biblical storm is raging outside, creating a real sense of urgency throughout the show.

As the weather worsens, a string of hyper-farcical characters are swept through the door. First in are Ripley, an overworked NHS nurse (Michele Austin) and her daughter Dora (Shaniqua Okwok) whose comedic timing is a breath of fresh air, despite some of the cheap jokes they had to work with; one being Dora’s exasperation as a late teen being in a house with no wifi. In tumble more characters, Dominic the old vicar (David Hargreaves), Ted the Albion, right-wing extremist (Shaun Evans), Ruth, Ted’s unloved and seemingly brainwashed partner (Amy Forrest), Anton, Ted’s accomplice (Peter Bray) and Perry, whose only tropes are being overweight and living in a caravan (Edward Judge). The volume of characters made it difficult for Buffini’s writing to really delve into any one plot line and didn’t give room to fully develop these characters beyond one dimension, which made it difficult to love and fully relate to any one character. It was surprising to hear some of the jokes that went with Perry, as they were archaic fat-shaming jokes that were perhaps funny to audiences ten years ago.

There were glimmers of exciting ideas at various points. The vicar holds the argument that one can believe in God and in science, that our free will has created this chaos that is climate change. ‘Why did God give us dominion - did he not foresee what we would do?’. In one of his later conversations with Diana, she comes to the realisation that she is ‘not a good person’, where he profoundly replies that ‘no one is’. However, as soon as these moments arose, they were soon lost. Subplots ironically flood the stage, leaving us drowning in one unfinished plot line to the next. One being a strange banging that occurs in the attic that is never fully addressed. Another being a sudden passionate kiss between Isis and Dora that has hardly any build up.

Ted’s character dominates the stage as the embodiment of the ‘conservative straight white male’ and is the clear villain of our tale. He has some enjoyable scenes and dialogue wherein he is constantly comparing himself to a God and believes men are superior despite referring to this ‘great island’ as being his ‘mother’. His passion with Diane seems a little forced, although it’s clear to see her intention of lusting after an objectively terrible person, to perhaps dampen the clarity of her sins. However, Ted holds no charisma as our villain, and it is a struggle to see how he has both Ruth and Diane at his feet.

Lez Brotherston and Jon Clark are a powerhouse duo in their set and lighting design. As we finally see the real protagonist of the play (the flood), thick clouds of smoke rapidly dance their way through the door and are lit in hues of blue and green giving us a breathtakingly dramatic finale.

Unfortunately, ‘Manor’ is an opportunity lost. Despite its entertaining nature at times, the play could have done with fewer characters and clearer plot lines, and a better understanding of a modern audience’s sense of humour. There was room there to really explore some interesting ideas on religion, climate change and the state of aristocratic England but instead these ideas are drowned in cliches and cheap jokes.

It runs until 1 January.