The Comedy of Errors - Review - Barbican

An 80s throwback farce on holiday from the RSC 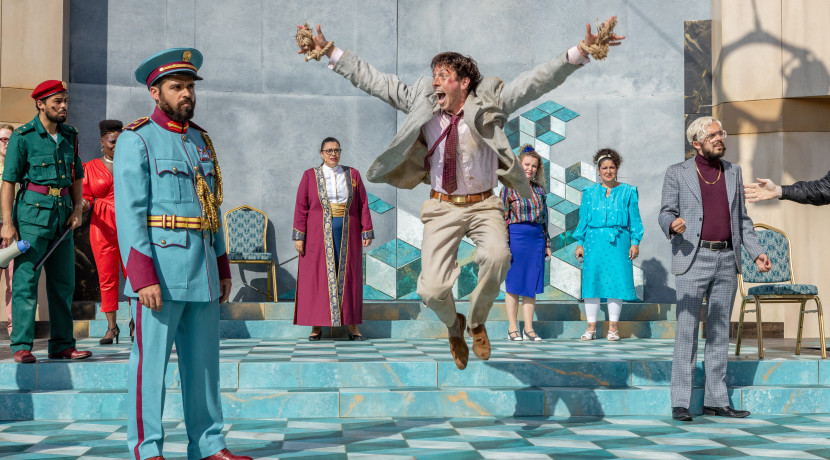 To hear the Royal Shakespeare Company’s new production of The Comedy of Errors in their home of Stratford-Upon-Avon was an exciting prospect. In a newly created outdoor theatre, they set out to get this production seen and now it is on tour. London can finally see what the fuss is all about.

We seem to be in 1980’s mania at the present. Perhaps enough time has past for nostalgia to flicker in the air and for vivid memories of the past to be brought on the stage, with some regrettable fashion choices to boot. Director Phillip Breen has whipped up an excitable cast and gave the show everything it could need. It’s quite busy at times, the opening number a bit cluttered.

The musicians who sing and beatbox throughout did wear thin after some time, though the added humour at times did complement proceedings. Designer Max Jones has gone for that chic new-romantic feel, with the characters on hols in Greece. We see yoga sessions, wild fashion chooses and guppy attire abound. I questioned if the setting added anything to the story and am still unsure.

A large cast proved their chops, though some moments the humour might have been a tad forced, though most jokes landing well with this press night audience. I’d say the show belongs to Dromio, here played by Jonathan Broadbent. Given off Michael Crawford and Benny Hill vibes, there is a swiftness seen throughout, wild gesturing and exasperations a highlight. My regards must also be sent to Naomi Sheldon as Adrianna. Taking over the role from Welsh actress Hedydd Dylan, you could easily say Sheldon is the doppelgänger of Sheridan Smith, with massive hair and eyes bulging with wild confusion, in this tale of mistaken identity and role-play. She was a delight.

A wistful Antony Bunsee as Egeon, sets the tale in motion, the impact of his situation made clear with a prevailing sadness. The Courtesan is hereby Toyin Ayedun-Alase in an outrageous part made all the better by a sensational fiery costume. She is not in this enough. Hats off to the RSC for finding actors who look like their twin characters as well. The other Dromio is Greg Haiste, voicing almost like that of David Lamb from Come Dine With Me, frantic in comedic execution.

Guy Lewis and Rowan Polonski are both Antipholus’, both tall and having some great facial expressions to all the goings-on. Both are also rather funny. Baker Mukasa gets to play Angelo in a very amusing way, the confusion over the gold chain part of the madness of the miscalculation. Avita Jay as Luciana has fun in a not so amazing role, more of a bystander to the comedy in front of her. Nicholas Prasad takes on the one-note Duke (Dukes usually solves problems in Shakespeare) who tries to untangle the tight net of concerns at the end of the night, the immaculate “drip” of his costume uniform perfectly tailored for him.

Some other touches are interesting, the use of sign language as a silly Russian bodyguard translates lingers in the mind. An insecure waiter with his toupée coming off, cleverly goes into the other characters verse, using the balding man as a metaphor as if teasing him. The second part of the night is where the comedic magic happens and its feel like everything is thrown in the pot. This runs till new year’s, perhaps a change of climate in the festive season?

It runs until 31st December