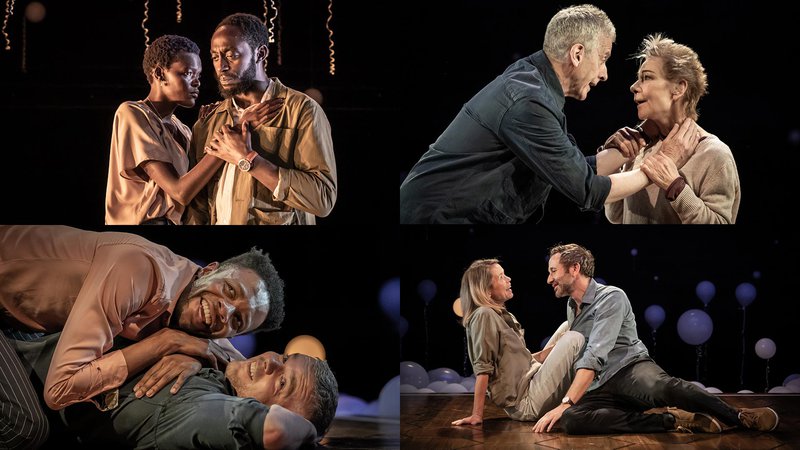 The first thing that ran through my mind after I’d watched the Donmar Warehouse’s production of Constellations by Nick Payne was that it must be an extremely difficult piece for the actors to learn as it’s a play which features a multitude of possibilities. The narrative constantly rewinds so that the dialogue plays out and then is replayed with subtle variations. So, at the opening when Marianne and Roland, a physicist and a bee keeper, meet at a barbecue and get chatting, sometimes events develop and sometimes they don’t. Depending on circumstances he is either married, has just come out of a relationship and is not looking to start another or has no attachments that he needs to worry about. Later Marianne is definitely or maybe having an affair … or not… and Roland displays various forms of response to the news. In yet another section both have no words with which to communicate and resort to sign language. Just when you think you’re getting the measure of it, this play intriguingly shifts gear and Payne takes the audience down an entirely different path.

For although at heart this is a play about a relationship, it also concerns the infinite possibilities which the universe might throw at us and demonstrates how choices and reactions are key to development and change. And this production takes things one stage further by allowing us to see, or at least choose from, four quite different couples performing the two roles. I opted for the elder statespersons in the form of Zoë Wanamaker and Peter Capaldi* who bring authority and gravitas to their roles though they equally have a good deal of fun with what they are doing. They are particularly good in the later scenes when time starts to run away with them and there’s a real sense of urgency as they come up against the inevitable; while there may be many different pathways through life they all, eventually, lead to the same outcome.

The piece is only about 70 minutes long but packs an awful lot into a short space, driven by some scintillating direction from the Donmar’s Michael Longhurst who ensures that the constant repetitions never become tedious. Tom Scutt’s great set is free of everyday distractions such as furniture and props. Rather the balloon and streamer dominated space seems to hint at the endless reaches of the universe/multiverse itself and this is reinforced by both the lighting and soundscapes (Lee Curran and David McSeveney respectively). A further pleasing touch comes from Simon Slater’s haunting theme music.

There’s a real sense of the experimental about this play and production and it would be fascinating to see it done again with a different pairing if only to prove that great writing can be interpreted and reinterpreted in any number of ways. It will no doubt touch a chord with many viewers coming at the end of a period in which we have seen various possibilities close down on us and our time on this planet start to slip away. And unlike Marianne and Roland we only get one go at it.

*In the three other iterations the couple are played by the equally appealing pairings of Anna Maxwell Martin and Chris O’Dowd, Sheila Atim and Ivanno Jeremiah and Russell Tovey and Omari Douglas

All four versions of Constellations are available on the Donmar Warehouse website.