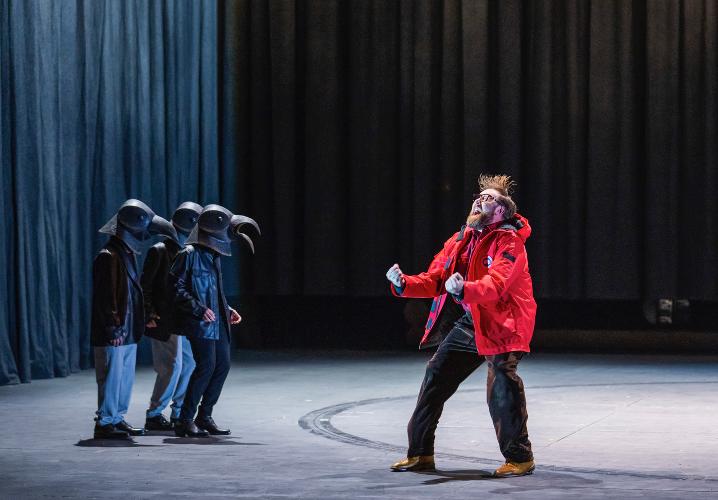 The idea of having any Wagner opera performing to a full house, felt a long time off during these times. Staggeringly, English National Opera has risen to challenge for The Valkyrie, with plans for the rest of the Ring Cycle to run till 2025. Director Richard Jones has embraced the outdoorsy, Lincoln-log clad feel of this massive story of giants, gods, dwarfs and dragons.

The first act is a stark cabin, as if artist David Nash has popped his latest piece right through it, a visual cue like Wotan and his sword, which remains stuck in the centre of said house. We see creepy crows, Welsh Mari Lwyd horses and actors lurking upstage with what’s on their persons hard to make out. I can see Jones having a field day with the following opera Siegfried with its idyllic setting. Speaking to some people on the night, they said they struggled with the production but loved the singing, the usual quip made in the world of opera today.

Wagner never shy’s away from dense, dilatory music, with some truly exquisite sections to pinpoint. All ENO work is translated into English and with new audience members under 18 in the theatre (who can now go for free!), we might have just made some converts. The sensational ENO orchestra were an army in battle, the percussion and four harps busting out into the boxes of the auditorium, with brass constantly heard throughout. The familiar motifs famous by Wagner are bled in and out of the score, the recognisable Ride of the Valkyries getting a few quotes here and there before the act three opener. The sight of which was unforgettable: hanging bodies of fallen warriors, ash falling as a lone woman tap danced.

A blockbuster line up of British and beyond singers blew this out of the park. Siblings (and also lovers) Sigmund and Sieglinde are the rapturous Nicky Spence and Emma Bell, who are very touchy feely and have romance of sorts. The baddie for the night is Hunding from Brindley Sherratt, Sieglinde’s wife beater husband, commanding a lot of power in the role. Wotan is Matthew Rose, chief-god and bombast, not too overdone in the role, seeming to create just the right amount of balance in tone. Rachel Nicholls is his daughter Brünnhilde, dressed up more like Billie Eilish. I wouldn’t say I was taken with her voice as much as I should have been, though she seems to have the skill set. I think she will grow into this demanding role.
Susan Bickley was billed as Wotan’s nagging wife Fricka, though due to poor health only acted out the part. In a box, came Claire Barnett-Jones singing as Fricka, in this strange disconnect. Bickley gesticulated widely and Barnett-Jones has rich properties, later heard again as another Valkyrie warrior - Rossweisse. The full set of Valkyries were an electric, diverse group of women who did not disappoint in their flight nor in their pleading with Wotan to spare Brünnhilde from exile due to going against his word about Sigmund dying by request of Fricka. It’s safe to say there’s a lot going on here.

Health and safety protocol sadly saw a damper on a flaming finale. Effective video work by Akhila Krishnan saw another villain Alberich towering over Wotan, mocking the god for the exploits of the past opera (The Rheingold) and with touches of foreboding of the cataclysmic events to follow. I look forward to seeing more of this whacky ring cycle. As for this Valkyrie…it was exhausting, moving, intriguing and had moments of amusement.

It runs until 10 December