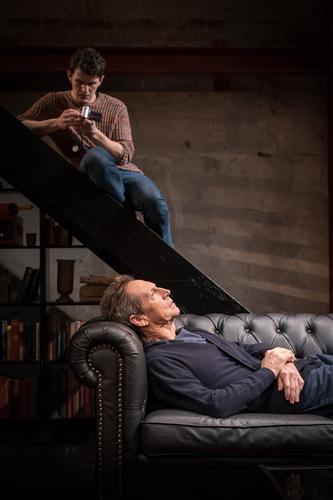 Beau (Jonathan Hyde) is 62. He moved from New Orleans when he was younger, lives now in London, and plays piano professionally in Covent Garden five nights per week. He meets on Gaydar 28 year old Rufus (Ben Allen), a much younger lawyer with mental health problems. But the casual encounter will not be just a night of sex; it will be the beginning of a long relationship that will bring into the light all the differences related to the age gap and the different backgrounds.

The set of this play, written by Martin Sherman and directed by Sean Mathias, is Beau’s London flat, beautifully created by Lee Newbie; the colours, the books, the black piano; everything is designed with careful attention to detail.

We spy on their relationship for 13 years. The story of the couple is interrupted by Beau’s narrations of his past, recalling how it was difficult growing up as a gay in Louisiana (his father used to call him “faggot”), recalling his relationship with a Canadian actor friend who died of AIDS, recalling the Upstairs Lounge (a gay bar) arson attack, in 1973, where 32 men died as a result of fire or smoke inhalation. These monologues give an insight into the gay history and they are important to understand how things have changed in the last 40 years. Things that Rufus takes for granted, like civil partnership for gay couples, are the result of years and years of pain and fights.

Even though essential to understanding how all the years of discrimination and suffering have left Beau’s soul scarred, the continuous reminiscing interrupts the flow of the narration.

The play is funny and entertaining, but the story between Beau and Rufus does not have much pathos; it goes from being awkward to sketchy, to ending quite abruptly and weakly when Rufus tells Beau that he is seeing a younger guy, Harry (Harry Lawtey); until the schmaltzy end.

Gently down the stream is a gentle play full of thought-provoking inter-generational considerations.  It reminds us that our past – even if horrible – does not define our present and does not preclude our happiness. We can be happy. Here and now.

Gently down the stream runs until 16 March