Come from away - Review - Phoenix Theatre 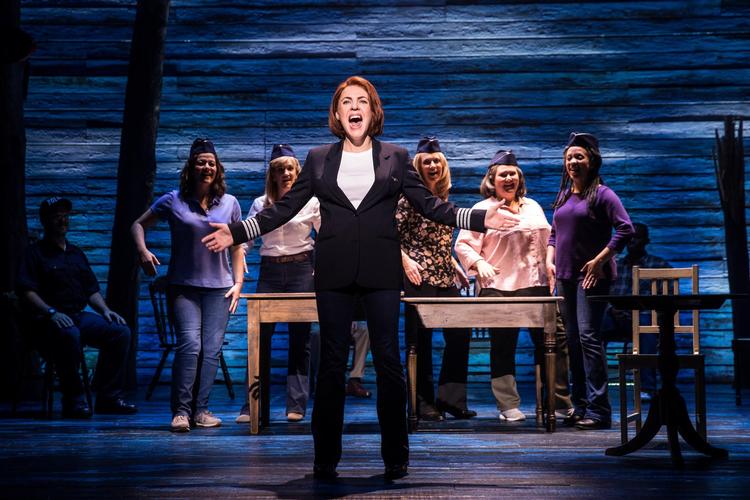 Come from away is the story of what happened in Gander, Newfoundland (pop. 10,000) when 38 jumbo jets were diverted on September 11, 2001, to the airfield there (used a great deal when planes couldn’t make it across the Atlantic but then very quiet once there was no need for a refueling stop). The plot – based on interviews - is how the townspeople and those of the planes (about 6,500 of them) managed the 5 days that US airspace was closed. It focuses on a few people of each group and ends with an update 10-years later when there was a reunion.

It opened on Broadway in March 2017 and won for Best Direction of a Musical for Christopher Ashley at the 71th Tony Awards.

September 11, 2001, is a day that has changed our lives forever and it is impossible not to be moved by some of the stories, especially the bond between two women, Beulah (from Gander, played by Jenna Boyd) and Hannah (from New York, played by Cat Simmons). Their sons are both firefighters but Hannah's son is missing. Rachel Tucker plays Beverley who fights the sexism in her job, but she feels powerless and anxious, not knowing when they will be able to leave the small town and if they will, where they will be directed.

There is Diane, from Texas (Helen Hobson) who finds romance with Nick, a British oil company engineer (Robert Hands) and a gay couple whose relationship is in crisis (David Shannon and Jonathan Andrew Hume).

There are many characters (more than 40) in the show, played by the talented cast, even if the multiple subplots can be confusing at times. 12 actors, which represent everyday people from all over the world: 12 chairs moved to create different locations. The woody set (Beowulf Boritt) is simple but beautiful, and the lighting, inspiring (Howell Binkley)

Come from away is a concise, “feel good” story, tightly directed by Christopher Ashley, completely based on the incredible generosity of Newfoundlanders during the 9/11 events and their profound support to the people landed there.

It is a hymn to human kindness. Canada is a great country and their population is very generous (I have been there several times and I can confirm) but do they really let you steal their BBQs from the garden?

I found most of the characters stereotyped; the dialogues and the lame jokes (sexretary, really?) did not help to build dimensionality to their personalities. Also, I could not find in the folk-rock soundtrack any tunes that could be defined memorable.

Come from away is an enjoyable musical and a great story of hope and coming together to help each other that needs to be told.

Come from away runs at the Phoenix Theatre. Tickets here