A nostalgic love letter to music and loneliness 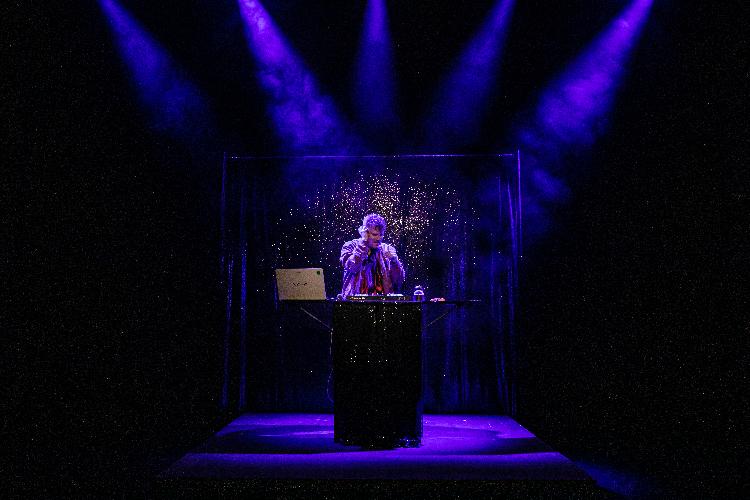 There was once a time when the school disco was the peak of all social occasions. Dancing along to timeless tunes such as ‘Who Let The Dogs Out’ and ‘Barbie Girl’ whilst experiencing the most intense sugar rush known to mankind was unlike anything else our tiny minds had ever encountered. Georgie Bailey’s story captures this nostalgia lovingly through the eyes of guilt-ridden part-time DJ, full-time caretaker Baz.

From the very beginning to the very end of his set, Jack Sunderland is exceptional as Baz. The energy and life he brings to his performance is incredible, particularly when you remember this is a one-man show with almost no space for a breather. Sunderland has the audience in the palm of his hands from the start as he leads us in the Macarena, creating the party atmosphere, but he is equally able to command ringing silences and portray the restlessness of Baz at his very lowest.  His physicality in these moments is expertly crafted. Baz is an intense character throughout, and therefore, it would have been nice to see some more steps in his emotions, rather than jumping straight to level 10 each time to minimise the risk that the character wears the audience out.  Bailey’s script is a little slow to get going, but, overall it is well-paced and a delight to watch. Baz is consistently jumping between past and present, but because of the strong structure and clear writing, it is easy to follow as we learn more about the man in front of us. Bailey has a clear love for music and has managed to translate that love into an equally joyful and heartbreaking piece of theatre. Chloe Stally-Gibson’s lighting design is wonderfully slick, delicate and timed to perfection with Lucy Betts’s effective sound design to establish the disco vibes, as well as frame the more poignant moments. Maybe in a fringe setting, the creative team could be a bit adventurous in how they bring the disco to life to create an even more exhilarating experience, just a thought…

This is a play that deserves to be seen by full audiences, in part, to allow the party scenes to reach that next level of energy, but also because this is a wonderfully, tender play about loneliness and finding our place in the world with the help of music, something we can all relate to.

It runs until 20 November