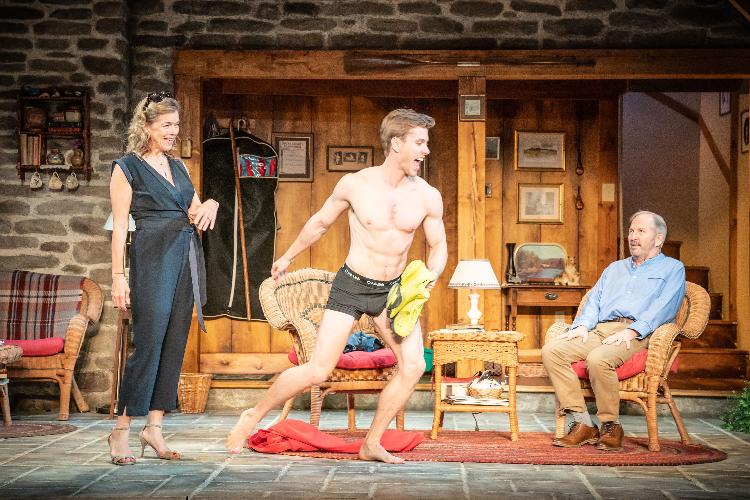 After almost two years since the original dates, and being the first West End show to have to postpone due to Covid, there were high expectations for Vanya and Sonia and Masha and Spike, written by Christopher Durang, and directed by Walter Bobbie.

Set in the Pennsylvanian farmhouse where they grew up, the show first introduces us to Michael Maloney as Vanya, and Rebecca Lacey as Sonia, his adopted sister, both now in their 50s and reflecting an accurate depiction of sibling relationships- turbulent yet loving. They are amid a beautiful set, designed by David Korins, although this doesn't change for the entire duration, so wears out a little as the play goes on.

Describing the ways they feel their lives could be better, the pair chat about what could be different, before Cassandra the cleaner, played by Sara Powell, enters, passionately reciting prophecies, in which she predicts the bad omens of the future. Her presence occurs at numerous points throughout the show, and is equally hilarious every time.

Masha, played by Janie Dee, soon arrives, showing off her film star mystique, and contrasting the countryside lifestyle that the other two know so well. Along with talk of her fame and fortunes, she brings along her new- much younger, 20-something year old- boyfriend, Spike (Charlie Maher). Her stand out performance is sassy and exuberant, perfectly encapsulating the essence of her character. Inviting her siblings, Vanya and Sonia to a local costume party, they are instructed to follow suit in line with her Snow White costume. Sonia, however, has other ideas, and much prefers being 'Maggie Smith', and does an excellent accompanying impression. A fan of Masha's called Nina (Lukwesa Mwamba) also comes along, as encouraged by Spike, and subsequently visits the house again several times over the course of the piece.

Dialogue bounces between characters well, and despite the lack of any huge movement, no scene is left unfilled, as each time a person leaves, another seamlessly appears for you to turn your attention towards. Rebecca is simply fantastic at becoming Sonia, with her highly amusing comments and pessimistic outlook, especially in combination with Janie as Masha. Michael often plays the peacekeeper as Vanya, but leaves his mark through his zealous monologue near the end of the show. Finishing with a bit of The Beatles to come full circle, it appears as if the era in which it is set, may not always seem so modern after all.

The storyline can most accurately be described as a bit bizarre. It is uncertain whether the nods towards Chekhov, climate change or family dynamics are supposed to have a great impact, as the piece undoubtedly strives to be only contemporary and lighthearted. With only expectations to have a laugh, you're probably in the right place, as the focus on being funny is very much achieved, though a meaningful plot is definitely lost in the process. Vanya and Sonia and Masha and Spike is definitely entertaining, but not necessarily all it cracks up to be as a significant play.

It runs until 8 January.