This all singing all dancing performance, directed by Rebecca Eastham, is based on a popular drama series aired on ITV1 back in the day and it doesn’t disappoint.

The female inmates are the usual, in for murder, arson, drugs, prostitution and their lives are intertwined in the fictional prison H.M.P. Larkhall. A series of events shakes their lives inside.

The set at The Gatehouse in Highgate is used really well and the live music was brilliant.

There was some standout singing, but not everyone hit their high notes.

A technical glitch halted the show, but the cast reacted really well, earning a huge laugh of appreciation from the audience.

Each actor wore a small microphone, but it felt like the levels were all different with some members hardly being heard – an issue which might have been related to the glitch.

The harsh reality of prison life is laid bare - a rape, a suicide, a riot, but they all occurred in an instant - blink and you’d never even know they happened. It felt like these should have been developed more in the scripting.

But that said, the show was edgy, insightful, funny in places, sad in others and honest.

And if you’re a fan of the television show then you’re in for a treat – the show features original cast member Nicole Faraday.

If you’re looking for nostalgia and a night out, then this is for you.

Bad Girls The Musical is on until 3rd March 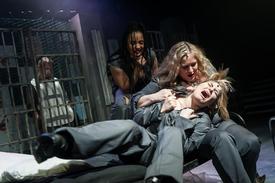