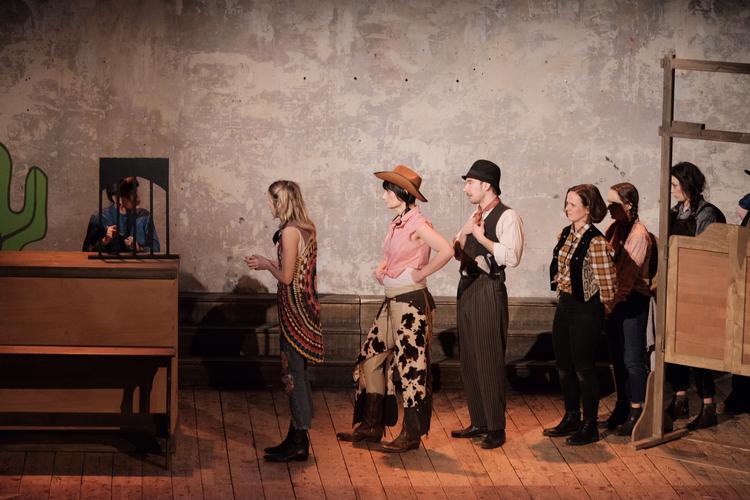 Improvisational comedy seems to be enjoying a resurgence of late, what with the Showstoppers! playing a successful stint at the Other Palace, and the Austentacious gang winning rave reviews for their Jane Austen-themed shows. And this weekend at the Wilton’s Music Hall sees some of the world’s best improvisers take on a more extreme form of improvisation with the return of the London Improvathon – 50 hours of continuous, utterly random comedy.

This year’s show – The Good, The Bad and the Fifty – is set in the Wild West, and the 12th London Improvathon sees a whole host of improvisers descend on Wilton’s Creek – the town which, conveniently, never sleeps. Run by Sheriff Ace Winnebago, Wilton’s Creek is home to a range of quirky characters, from Pastor John and his not-so-chaste daughter Destiny; Will Chair the blacksmith; Clip Trimmings the local barber; Penny Black the postmistress; and the Cactus Sisters, who, as the name suggests, run a cactus farm. Paying homage to a variety of Westerns, including Deadwood, the 50 hours are broken down into 25 episodes, each lasting 100 minutes and comprising short, sharp scenes, with the cast given scenarios to run with rather than taking suggestions from the audience. Episodes 1 and 2, which were viewed for the purpose of this review, saw a number of hilarious situations, from town drunk Dirk Gunderson waking up in the county jail; awkward Englishman Will Chair accidentally falling for all three Cactus Sisters and Ace Winnebago recruiting a Deputy Sheriff; to the arrival of Missy Sippi (played by Charlotte Gittins) in a saloon bar; bear hunter Bear Grylls s to God; and the town’s women working through Little Whipper’s self-help book.

Directed by improv greats Adam Meggido and Pippa Evans, the London Improvathon is 50 hours of pure fun and hilarity, showcasing some of the most inventive and quick-witted improvisers around. They react impressively to any situation thrown at them no matter how strange (and the scenarios are sure to get stranger as cast members become more sleep-deprived). With so much talent on stage it’s difficult to pick out any stand-out cast members, but special mention must go to Sally Hodgkiss (Destiny), Seamus John Allen (Dirk Gunderson) and Paul Foxcroft (Kurt Smeaton) for providing some of the biggest belly laughs in the first two episodes.

What makes the London Improvathon – and improv in general – so fun is the random nature of it all and it’s amusing to watch cast members interact with one another, never quite sure of where it’s heading, not to mention try and create the likes of station wagons with the use of unfamiliar props. It’s an experience like no other, full of laugh out loud moments and unexpected twists and turns.

The rotating cast includes members of Mischief Theatre, Austentacious and the Comedy Store Players, with some attempting the full duration, and audience members can either watch standalone episodes or stay for the whole 50 hours if they’re feeling particularly brave. At the time of writing this review the seventh episode is being performed and the actors – and the audience – are still going strong – so there’s still time to join in if you’d like. Innovative and brilliantly unpredictable, the London Improvathon is a comedy treat which is not-to-be-missed!