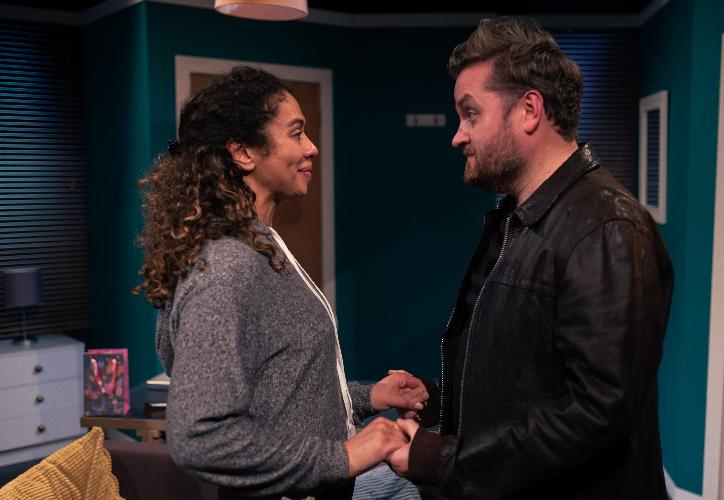 Bundling her huge suitcase through the door, strong-willed doctor, Rose, played by Jacoba Williams, arrives to find an unwelcome visitor inhabiting her flat. It appears that Adam- a highly sarcastic, rockstar maverick, portrayed by Derek Murphy- has misread the tenancy agreement as to how long he could stay renting the place. Following initially being told to leave for this, it is decided that he can stay on the sofa, instead of being kicked out and becoming homeless again. After much (arguably brief) deliberation, and prior personal resentment of the idea, Rose suddenly comes to the conclusion that she is determined to have a baby. However, this becomes more difficult than she first thought, as holding onto her independence, without being in a relationship, is a priority.

The space is very cosy, and dressed almost identically to a real flat, perhaps mirroring that of a sitcom. This simple yet effective set brings to life the familiar, everyday surroundings where the two live together. From driving lessons to dance lessons, the audience journey through the notions of Rose and Adam slowly warming to each other, despite their initial clash.

Though there were a few stumbled lines, the two-hander generally held out well; the witty dialogue is delivered with flow back and forth between both parties as if the viewers are immersed in conversation with the two of them. There are many comedic elements throughout, particularly highlighting the differences within the unlikely pairing, and their polar opposite ways of navigating the world. Adam's consistently blunt comments and Rose's struggle to tackle the task of acquiring a man to help her have a baby, are especially notable. Jacoba and Derek perform the strong personalities of their characters to a tee.

Love Dance, written by Andy Walker, and directed by Lesley Manning, is a funny and bittersweet story of a woman with ambitions for a successful career, while striving to balance building a family and maintain her freedom when unsure of the effects of a long-term relationship. Simultaneously, the somewhat disorganised man fleetingly sharing her flat is trying to kick-start his music career and vows to never have children. It depicts the little moments that start budding into something unexpected, proving that life's plans may not always work out how they once intended.

It runs until 27 November.