Dick Whittington: A New Dick in Town - Review - Above the Stag 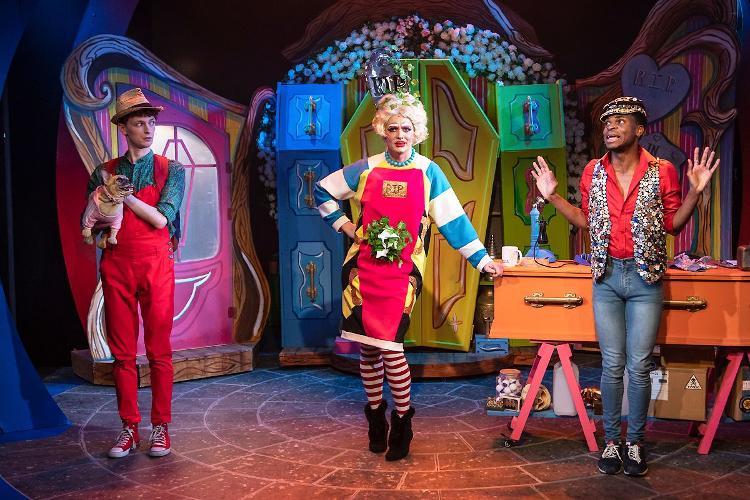 Above The Stag’s adult panto rushes us into Christmas festivity and gushes us with innuendo galore! With every ounce of traditional panto cheer, the strong cast of five lead us through a tale of treachery, testicles and titillation.

Jon Bradfield and Martin Hooper’s story takes us on a journey from a struggling London undertakers business to a secret island of solace for gays, glitz and glam. With the arrival of Whittington, played by Jonny Peyton-Hill, the family undertaker business has a fresh whiff of energy… but can they save the longstanding business of Mr and Mrs Fitzwaren, played respectively by Bradley Walwyn and Matthew Baldwin, from the plotting of Queen Rat, played by Nikki Biddington.

Directed by Andrew Beckett, the story welcomes us with open legs. Our narrator, a Londoner known as ‘Alex’, played by Keanu Adolphus Johnson, gives us a warm welcome in great taste. There’s no secret that this production is seeping camp and queer from every orifice. With the audience demographic involving mostly gay men, it doesn’t take Baldwin’s panto dame very long to win us over. Baldwin’s quick wit and grandeur is mesmerizing. Their ability to listen to a giddy group of grown-up gays and keep total control of various heckles and hand-gestures is a real crowd-pleaser.

In reverse, Biddington’s Queen Rat is perilous. Not only do they clearly not identify as a gay man, they have simply hideous rat ears and a vicious evil laugh to rattle your insides. Biddinton makes their professional debut and it is a great one at that; with the strongest vocals and clear professionalism whilst battling with microphone malfunctions, Biddington offers an evil villain full of fear and fervor.

Aaron Clingham’s arrangement is somewhat flaccid. The vanilla score lacks a certain punch to give the production the spectacular ‘wow’ of the west end. In contrast, David Shields’ set design is a marvel. Shields captures the fun and frills of panto and with details down to the very last kamikaze rat. Similarly, Robert Draper & Sandy Lloyd’s costumes are drop dead gorgeous; sequins, sailor hats and sex appeal make this a real visual treat.

The bells whistles and newly invented cockney rhyming slang give this adult panto a diamond-in-the-rough-glint that will certainly get your ass into Christmas gear!

It runs until 16 January.