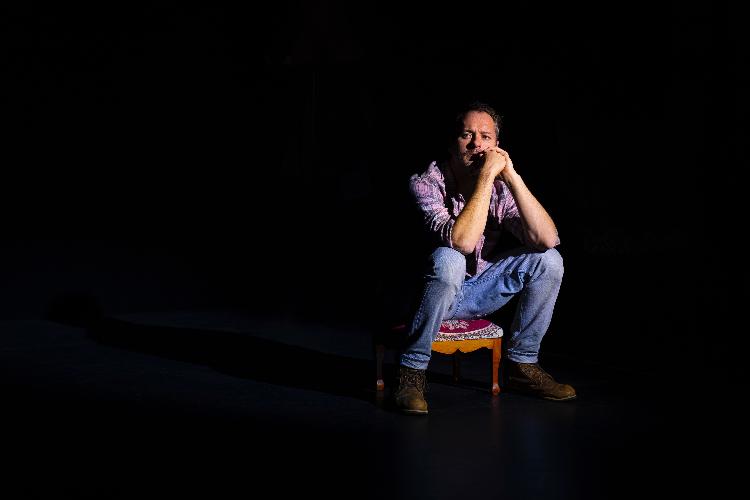 In terms of performing, there are challenging situations. Make a one-man show based on your diary and talking about your mental health, your fears and concerns in front of an entire - and fully packed! -  auditorium must be one of them.

Declan Bennett was bold enough to do it - and he was giving a masterclass as an actor AND as a playwright too.

He is talking about his very personal and private experiences about Lockdown 2020, and although sometimes he is literally lost in his memories, he never stops to stay welcoming and invites the audience to be with him in this, to feel what he felt. The approximately 1-hour long show is like a session, where everyone is mentally holding each other's hand. Bennett is talking about a really personal side of a very common trauma with his own beautifully written words, leading the audience through his own journey: how he was dealing with the situation, being on his own for 6 months during a lockdown far from everything in the countryside. How he was fighting - and how he gave up the fight at the end.

There are a bunch of Bennetts on stage: the grown-up man during the lockdown, the teenager one on the playground, the seven-year-old child in front of the TV and so on. He is switching between these guys so easily, no doubt that every one of them was waiting so long because they had something to tell. Topics like cancer or being betrayed by your friends as a teenager because of who you are sound really tragic and triggering, but Benett added a perfect amount of humour and self-irony to the way he is delivering these stories, so it’s a literal emotional rollercoaster, just to listen to him. You just can’t avoid being involved emotionally. Bennett is an outstanding actor and a master of words.

On top of that, it’s obvious he has found the perfect co-creator in Nancy Sullivan who is the director of the long time overdue and well deserved ‘Declan Bennett show’.

Compared to the work in progress performance in June, not much has changed, obviously, the staging is one of them. It’s really simple, basically, a bunch of props but the nature of the show doesn’t require more. The beauty of this show is that Bennet doesn’t want to hide beneath the set and lighting, he doesn’t want to make this confession easier. It's just him, as an individual, brave and bold, talking about such things we are not even able to admit to ourselves.

Make sure you grab your ticket to witness this raw, honest and emotional one-man show at Turbine Theatre - this week only!

Playing until the 13th of November.