The musical remake of the movie opens in London 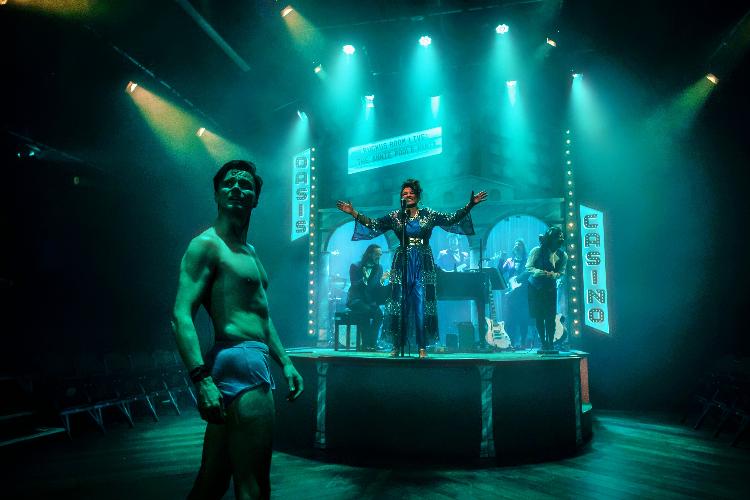 What would you do for a million dollars? That is the question presented in Indecent Proposal. When married couple Rebecca, played by Lizzy Connolly, and Jonny (Norman Bowman) find themselves with the dilemma of faithfulness or money, it appears difficult to know what to choose. Inspired by the novel by Jack Engelhard, and subsequent hit film, this world premiere piece, directed by Charlotte Westerna, queries the lasting impact of decisions, and whether infidelity is a fair trade for fortune.

While happy and in love, though struggling to make ends meet, the couple face a preposition from a wealthy businessman, Larry Harris (Ako Mitchell), in exchange for a night with Rebecca. Being rich would change their lives, but so would being disloyal.

Set in Atlantic City, 1988, and with most scenes in the Ruckus Room, at Oasis Casino Hotel Resort, the show begins by introducing Jacqueline Dankworth as Annie- who runs her own gig there- as well as her band. It is refreshing to see the live, five-piece on display throughout. In addition, the set changes are seamless, and transition smoothly, utilising the space well. Although the stage stays the same, the surrounding areas are frequently changed, with particular note to the bed that appears from underneath the stage, that doubles up as a casino counter: the simple design is used fittingly. The effect of the roof falling away is also nicely done. Due to the nature of the seating arrangements at this theatre, there are occasionally times where the speaker has their back to you, though doesn’t necessarily detract away from the overall performance.

Jonny first appears topless, to perform his act to his adoring wife on their anniversary. ‘Next to Nothing’ stands out, with several reprises and being used to make the show cyclical, as it is played in a similar style at the end. Soon after, this is followed by Annie singing ‘Quit While I’m Ahead’, which introduces us to her strong vocals. Larry gives a compelling performance with ‘Have Love Again’, and Jonny and Rebecca’s duets consistently create a rich blend of tones together. Despite this, as a whole, the score seems rather bland, with no particularly memorable tracks, though each one is still executed brilliantly.

Left open-ended, with no answers as to the true results of the decision, Indecent Proposal leaves the viewers to make up their own minds. The plot seems a little slow once the initial question has been posed, though the piece definitely charms the audience. Who knows how Jonny and Rebecca faired, but what would you do?

It runs until 27 November.