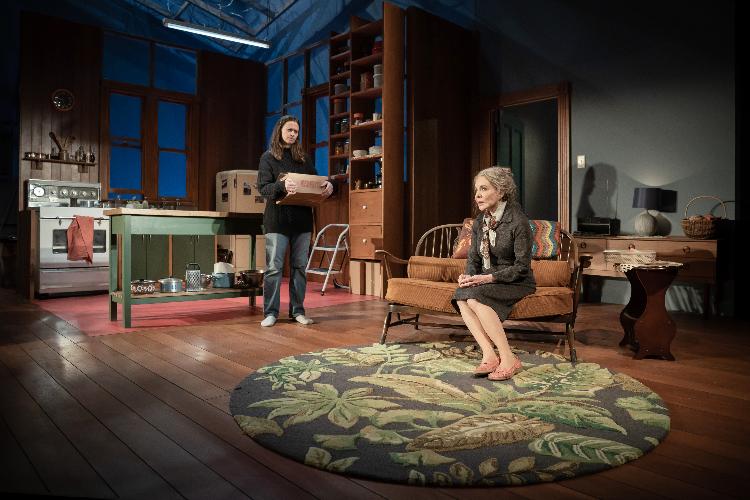 It is said that a suicidal person is most at danger to themselves when they show sudden calm and clarity following a deep depression. In Norman’s award-winning piece, Jessie (Rebecca Night) is experiencing that calm. She has decided that tonight she is going to end her life. Her mother,  Thelma (Stockard Channing), rejects the notion and, as the evening unfolds, truths and tales unravel that test and alter their relationship for good.

The casting for this production is impeccable. Both Channing and Night are highly convincing as a  mother and daughter pair, with their troublesome past fighting to breakthrough. Channing is able to flex her impressive range as Thelma, taking us through emphatic panic and despair to stupefied numbness within the 80-minute runtime. Her performance is incredibly natural and intricate, clearly making the space her own. However, it would have been perfection if she was able to push the terrified desperation further during the climaxes of the piece. Her comedic timing,  on the other hand, was exquisite. Amusing, throwaway lines are peppered throughout the script and each time Channing ensures they land expertly.

Night’s performance is determined, cold and clinical. It is tricky to portray a disconnected character whilst simultaneously not coming across as stiff or wooden, but she does this excellently. The subtlety in her acting is a marvel, but like with Channing, the climaxes in the performance left me wanting more. The pair work relentlessly in tandem to keep the piece driving forward, with barely a moment’s respite. This results in the silences being overwhelmingly deafening and powerful.

The direction from Silbert ensures that the performance is dynamic, despite the play taking place entirely in one evening and one room. Green’s set is delicately naturalistic and detailed, allowing the characters to feel more grounded and at home. A nice touch in the design was barbed like wire above the set that emphasised the feeling of being trapped or imprisoned, a common emotion for both characters. The themes of Norman’s play still hit incredibly hard 36 years on from its UK Premiere (also at Hampstead Theatre). The feelings of loneliness and isolation are timeless and are sure to resonate with a modern audience.

Silbert and the team have crafted a sublime production worthy of the heritage that comes with putting on a Pulitzer prize-winning play.

It runs until 4 December.