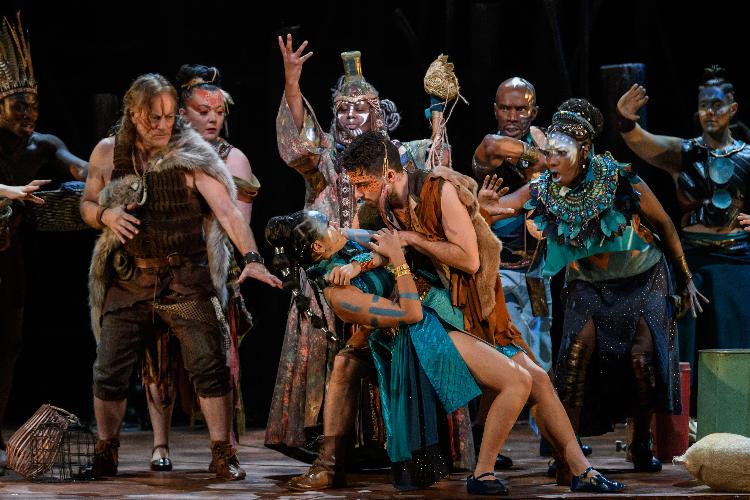 Set on an alternate earth in another time VANARA tells the story of two rival and competing tribes,  brought to a head when two of their own fall in love and fight to bring the clans together. Does it sound familiar? If you are thinking that this sounds like a dystopian Romeo and Juliet/West Side  Story you’d be right (the ending of act one fully cements the similarity). It is impossible to not make this immediate comparison and therefore this musical is doomed to underwhelm from the very beginning.

Unlike Sondheim’s West Side Story, this is a very raw and tribal piece with Gianluca Cucchiara’s score giving the show a pulse, albeit an often faint one. Eleesha Drennan’s choreography successfully accompanies the music and is on the whole impressive, with a highlight being the dynamic and visceral nightmare sequence in act one. However, all the hard work by the creative team and cast is totally undone by the text. The script is poor, inconsistent and painful to watch.  The underlying plot is dull and it feels that, despite the two and a half hour runtime, that sections are missing as we jump haphazardly between settings and scenes. The ending of act two specifically, is rushed and disappointing.

There are also various technical issues with this production including cast members’ microphones not being turned on until halfway through their line and the curtains at the side of the stage not being properly closed so the audience can see actors walking around and waiting to enter.  Hopefully, with more performances, these problems can be addressed. Libby Todd’s set is striking and used nicely by the cast but the constant use of the revolve during the ending of solo songs is pointless and creates a distraction from the vocal talent on display.

Emily Bautista as Ayla is the standout performer of this production, she has an incredible voice that soars over the forgettable score. There are glimmers of hope for the music, particularly when the cast is able to sing together in resonating harmonies but those instances are rare.

This piece sets out to be something different but instead follows all the common tropes of musical theatre and therefore it is hard to know what it is trying to achieve. There is some potential here for a quality production but it first needs to decide what it wants to be before it attempts to be the legend it claims to be.

It runs until 31 October.