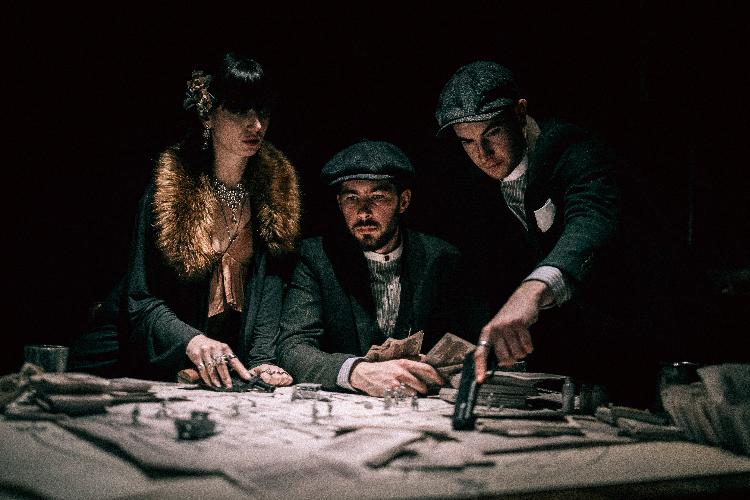 Slightly off the beaten track in Elephant and Castle, sits a wee ‘boozer’ pub; dimly lit, but cosy-looking in a mysterious kind of way. Along the banner of what once must’ve been King William IV, reads COLAB THEATRE and outside, an eager audience loiter.

Crooks 1926 blends the interaction of an escape room with the atmosphere of a Tom Hardy drama. The strong cast of 4 control a narrative of treachery, sacrifice and bravery. Despite the best efforts of rival mob boss Sabini, the ‘Elephant and Castle mob’ seek revenge after the death of their beloved leader, Robert. Forced to meet his demands of 10 thousand pounds, the family require your assistance to beg, borrow and steal stacks of cash in a scarce amount of time.

Colab’s production value is water-tight. From booking a ticket through to plotting and scheming, the commitment to the world of the piece is thrilling. With dress ideas and some historical context upon booking, the anticipation for a lived-in experience begins and keeps us suspended till the final beats.

Angus Woodward is a brilliant front-man, welcoming the audience in a friendly, yet sinister fashion. Their charm and commitment to the character and world of the piece is the strongest component to making this experience land. With important safety announcements given the appropriate weighting, Woodward still finds enough warmth to encourage us across the threshold.

Once settled at the bar, the game begins. Meeting the characters of this underground world of deception and deceit, the performers sift smoothly through the audience, introducing themselves and their relationships. An attitude for improvising and going with the flow is certainly a bonus for this show…

Colab’s design is magnificent. The working bar transports us back in time and the newspaper articles plastered along the walls sets the scandalous tone. Each room of the intimate space captures the imagination and the devil really is in the detail, from the old fashioned telephones connecting via switchboard, to the secluded cellar with ‘rats’ running through the walls.

Peter Dewhursts’ Sabini immediately sets the tone with a powerful entrance and sustains this with a deep and powerful voice. Their interaction with the ‘mob’ is intimate and consuming. Similarly, Esme Coopers’ Alice raises the stakes with genuine fear during moments of tension. Danny Romeo’s Mr Summer has a friendly manner that gives a nice balance of light-hearted humour with his rather Irish Scotland Yard agent.

The detail and commitment from the cast for Colab’s production of Crooks 1926 gives this show a great edge that is certainly a recommended treat for groups of friends or colleagues.