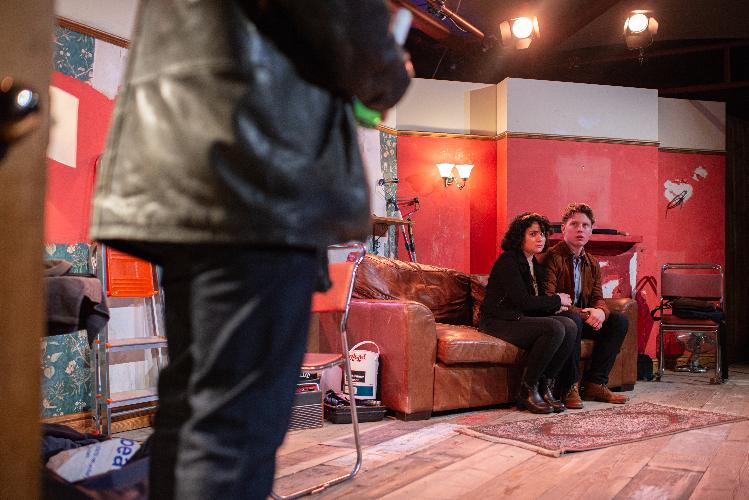 Nestled under an impressive canvas in a car park in East London, The Arcola Outside is a fitting location for Robin Hooper’s Broken Lad. The city soundtrack allows The Albion Pub, where the entirety of this play takes place, to feel more real than it would have in a traditional venue.

Upstairs in the pub is Phil, a failing comic searching for his way back into the spotlight. In a  previous life, he was a well-known performer, appearing on television screens across the country but now he is struggling to get even twenty people in a room. Patrick Brennan is seriously impressive as Phil. He allows the unpleasant and manipulative character to flourish, creating discourse wherever he goes. Supporting Phil in this quest for success is the long-suffering Ned  (Adrian McLoughlin), a sidekick of sorts to the fading comedian. McLoughlin is solid in this role,  regularly popping up with some sharp insight into the other characters.

Dave Perry as Josh and Yasmin Paige as Ria are also excellent in their performances. Perry shows his range during the play, switching from desperate vulnerability to quietly commanding in a moment. Paige brings vigour to her portrayal as Ria and is particularly strong with her subtle,  knowing looks towards Phil throughout. Carolyn Backhouse was also brilliant and, it would have been nice for her to have more time on the stage. Both Paige and Backhouse should be commended for their performances as sadly the female characters were not particularly well written and therefore must have been a struggle to make them more than two-dimensional roles.

The dialogue in this play is nothing short of clunky and begins to feel a tad monotonous through its 90-minute runtime. The revolving cast of characters appearing in different pairings is nice but because none of them is that likeable, it is difficult to empathise and care for them, meaning that the stakes are never that high. The writing lacks realistic perspective from each of the characters,  possibly besides Phil, and despite the best efforts of the cast, the words they say are hard to believe. Hooper’s text skirts through some serious and relevant topics, though it would have been nice if the characters were allowed to dive deeper in order to allow a hint of character development to occur as a result.

The detail in Cecilia Trono’s costume and set design were a delight to see, right down to Phil’s odd socks. However, their set was underused in the direction of the piece instead the characters move around space for no apparent purpose other than to create movement.

Despite the shaky text, this is a quality hour and a half of entertainment dotted with some delightful moments but be sure to bring a coat and wrap up warm for a chilly autumnal evening performance.

It runs until 6 November.