Love and Other Acts of Violence - Review - Donmar Warehouse

Breathtaking in the most haunting way 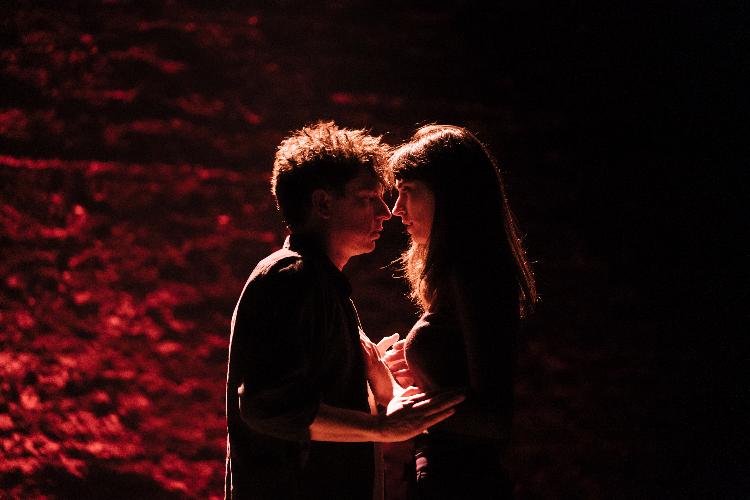 Cordelia Lynn’s powerful new play, a love story about inheritance and the cycles of politics and history, marks the reopening of the Donmar Warehouse following the completion of building works.

Lights up, and we start with a barefoot couple dancing away at a house party. ‘Him’ (Tom Mothersdale,) an ultra left-wing personality, is shouting over electro music as he attempts to court ‘Her’ (Abigail Weinstock).

The lights flash with a clap of sound and we see ‘Him’ and ‘Her’ progress in their relationship. We learn that ‘Him’ is a left-wing poet and hardcore activist, ‘Her’ is a university tutor.  ‘Him’ has dedicated a poem to ‘Her’ but she didn’t like the use of her full name in the programme. This is the first time we feel the underlying discomfort from the couple about displaying their Jewish heritage.

Scene after scene we see a dark toxicity between the couple. A brilliantly slick fight scene (by movement Director Yarit Dor) erupts between the two of them and the lava of fury echos across the stage.  ‘Her’ is panicking because her lucky Ram has gone missing. Another flash - The couple are tranquil and ‘Him’ floats the idea of pregnancy. ‘Her’ is uncomfortable and this is where Cordelia Lynn’s text takes flight. ‘Her’ delivers a haunting, poetic verse about having a “belly of corpses”. She talks about her fear of delivering an escaped corpse which feels like a metaphor for fear of raising a Jewish child in a dictatorship period.

There is a series of flashes pushing forward in the couple's journey. ‘Her’ resigns after her work asks her to “shift perception” in line with new laws being put in place. “We don’t have a police” - This dystopian world of dictatorship and antisemitism becomes more and more disturbing as the play matches on: it feels weighted in truth and horrifying fiction at the same time. We flash forward to a beautiful slow dance between the couple. ‘Him’ returns home from a dark evening, he admits he's taking part in the murder of a man and also admits that he took the lost RAM and destroyed it years ago. ‘Her’ violently attacks him when baited and we watch another incredible fight sequence as ‘Her’ beats ‘Him’ into the mud that surrounds the stage. The smell and texture of the soul throughout the show adds a raw depth to the piece. This gritty sequence ends with both characters crawling and climbing on the mud surrounding the stage floor to face each other. ‘Her’ decides to leave to a safe place without ‘Him’.

We then see one of the most impressive stage transitions. A floating platform reveals an incredibly detailed set design by Basia Binkowska.

We go back in time to 1938. We meet ‘Tatte’ (Richard Katz), a carpenter. His daughter ‘Baba’ played by Abigail Weinstock and two young brothers played by Finley Glasgow and Alexander Fitzgerald hurry in from the streets where men have broken through the barricades. The audience are thrown into Kristallnacht.

The use of sound designed by Richard Hammarton in this half of the play is brilliantly frightening and makes the show as gripping as it is. Father ‘Tatte’ played by Richard Katz provides much needed comic relief. The audience sit in tension as he hides his family.

Tom Mothersdale returns to the stage as he multi roles as a polish ‘man’;  “I could smell the fear” Cordelia Lynn’s script is haunting and the role is played with absolute believability. I sat on the edge of my seat as the confrontation played out.

The play ends with a slow fade and the audience took ten seconds to clap because of the reeling feeling that we were all left with.

This production is without a doubt a tribute to the Jewish race, history and Jewish people of today. Director Elayce Ismail has taken a complex script and laced this piece with fine detail, elegance and respect to the history of Jewish people.  A topical show not to be missed.