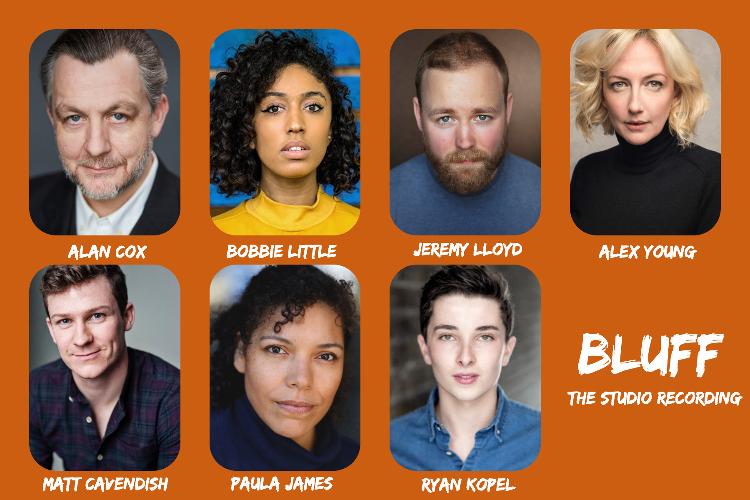 Bluff, composed and musically directed by Ed Zanders, is a new musical comedy about one honest man who grows up in a world where everyone else lies about everything. Recorded with a West End cast and musicians at Masterchord Studios in London, this larger-than-life musical is full of delightful songs and flamboyant characters.

Running for 90 minutes, the radio-play, complete with foley sound effects, takes you on a vivid journey through a larger-than-life world, accompanied by a live studio orchestra. It follows a young man as he navigates a strange and colourful universe, full of outrageous characters and peculiar situations. Amidst all the madness, it becomes clear that our hero must come to terms with his own dark secret, as the world starts to unravel around him, hitting home some of the issues many young people navigate as they grow up in a morally complex world. The musical highlights the impact of miscommunication and throwing others under the bus to get to where you want to be, in a humorous but down-to-earth way, whilst beautifully highlighting the importance of staying true to who you are regardless of what’s happening in the world around you.

This was my first audio-only musical and I wasn’t sure what to expect. However, ‘Bluff’ didn’t disappoint as it cleverly pulled you into their world and had you tapping your feet to the catchy and colourful songs. I didn’t feel like I was missing out on visuals as Matt Cavendish and Ed Zanders skilfully wrote the musical, giving my imagination just enough detail to run with. Charlie Smith did a marvellous job as the Sound Designer with the audio sound effects on-point throughout and the lyrics and musical compositions, by Ed, were delightful.

‘Bluff’ is a lovely way to spend a relaxing evening, especially if you enjoy audio only content and is available to download from Monday 18th October here.