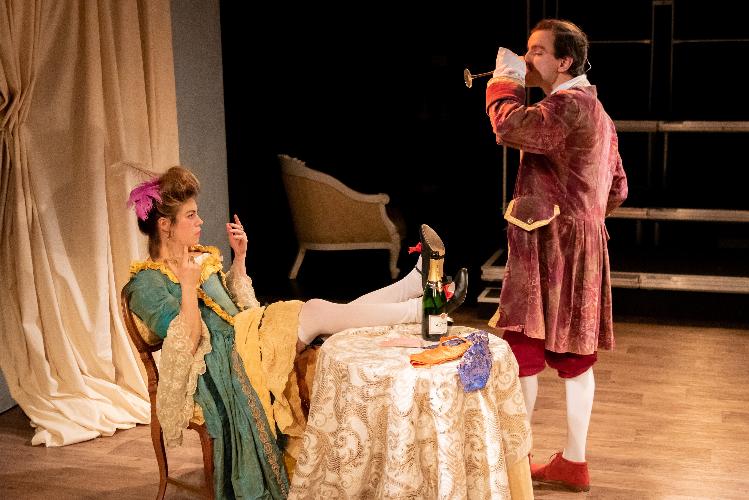 Based on Pierre Chorderlos de Laclos’ novel Les Liasons dangereuses, Christopher Hampton’s adaptation for stage tells the story of the Vicomte de Valmont and his rival the Marquise de Merteuil as they weaponise sexual prowess in order to defeat one another in a cruel relationship. The Vicomte de Valmont impregnates young Cecile de Volanges against her will and further targets the reputation of Madame de Tourvel. Similarly, the Marquise de Merteuil explores the appetite of Cecile de Volanges’ music tutor Chevalier Dancency.

Guido Garcia Lueches performance as the Vicomte de Valmont is shallow and unimpressive. There is a total lack of charm and wit in his tactics of seduction. Their efforts are self-indulgent and unflattering. In addition, there is a complete lack of musicality for movement, as provided by the live string quartet, and their consciousness to the time period within physicality is poor. When an actor can’t act… give them a prop.

Emma Wright’s Marquise de Merteuil, on the other hand, has a well rounded edge as she toys with Lewis Jenkins’ Chevalier Danceny. Wright deploys a genuine menace resulting in even greater sacrifice when letting her real suffering show. Similarly, Jilly Bond’s Madame de Rosemonde and Cassandra Hodges’ Madame de Volanges are equally as three dimensional as they counsel the young victims in their futures.

Jenkins’ take on Chevalier Danceny is a shallow mockery. A very amateur understanding of comedy with little result. The physical comedy did strike a match, effectively playing the rule of three, however this swiftly became stale and ineffective.

Maisie Armah’s Cecile Volanges is appropriately naive and innocent and very harrowing when being sprung upon with explicit scenes of sexual violence. Armah does well to contend with an unfortunate costume malfunction and it’s disappointing to see no-one help her out. Instead it gets ignored and sticks out like a sore thumb, distracting from the already quite complicated story.

Finally, Imogen Wilde’s Madame de Tourvel is the most honest and believable character in this production. Their attention to detail and connection to text is emotionally intelligent and genuinely humane. Wilde expresses the passion and adoration for the Vicomte with as much fervor as the heartbreak and disdain produced as a result.

There are a whole host of contradictions with the lack of commitment to the time period, most prominent is the continuity in accent with some heightened RP, modern RP and then weak

attempts at RP. Similarly, there are physicalities appropriate to the period in some performances contrasted with very contemporary postures within others. In addition, some of director Adam Nichols’ choices neglect choosing one or the other: in such an intimate space it is hard to ignore the modern plastic playing cards being presented in the same world as feather pens and ink pots.

The onstage quartet made up of Gavin Brooks, Helena Gullan, Emilia Harrild and Ryan Hopevere Anderson make a delightful sound. It's disappointing that the design prohibits featuring the supposedly on-stage talent due to the inadequate configuration of the thrust stage. This is also a problem with lack of awareness in some performances and important storylines being lost to large quantities of 'back acting’.

All in all, there is very little to entertain in this production of Les Liaisons Dangereuses. Lack of detail and basic acting principles tarnish Hampton’s well-conceived story.

WARNING: This show explores themes of sexual assault, flashing lights and other scenes of an upsetting nature. None of which are provided with obvious trigger warnings upon booking a ticket or within the premises of the theatre.

It runs until 23 October.