A Place for We - Review - Park Theatre

A bittersweet comedy-drama presented by Park Theatre and Talawa 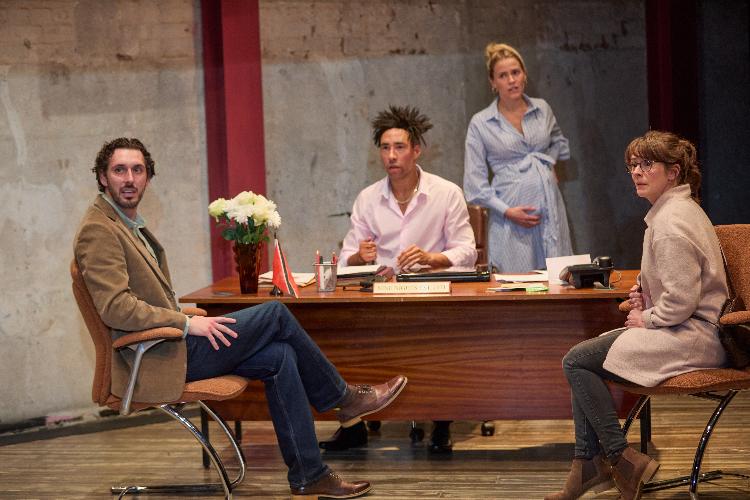 Grief and sentiment can be a difficult topic to deliver to an audience but ‘A Place for We’ from Archie Maddocks finds a sweet balance.

The moment I arrive at the venue I am greeted by warm smiles and excitement. Stepping into the space the audience are practically inside ‘Nine Nights Funeral Directors’. The set is lavish and sits on an impressively shiny wood veneer floor. Set designer Louie Whitemore has made very good use of the thrust stage.

The play spans three generations: the key themes are grief, change and regeneration.

We start with Nine Nights Funeral directors. Here we meet Clarence (David Webber), his son (Laurence Ubong Williams) and his son's wife (Kirsty Oswald). They are doing the final funeral preparations for ‘Miss Angie’. Clarence is stuck in his ways and is proud of his West Indian business model. We learn that Angie leads the fight for the wind rush generation; Archie Maddocks, the writer of this play, makes a lot of subtle references to Windrush throughout. He does a great job in offering a modern perspective on the scandal. Clarence is disgusted by the overturn of Caribbean business in the area, particularly when a lunch request for roti is returned as a Mexican breakfast burrito. Kirsty Oswald consistently provides much needed comic relief.

Blake Harrison and Joanna Horton burst on the scene as a sheepish couple who want a modern funeral for their aunt. Clarence ends up dismissing them voicing his dedication to West Indian funerals which frustrates his son. This scene work is fantastically funny. There is great timing and tension from the cast.

The writing does feel a little sporadic during the first act but the questions I had unraveled themselves. We bounce between three time periods in which the actors multi-role.

In the second act we then go back in time to when teenage Clarence (Harold Addo) and his father Elmone (Webber) buy a pub premises ‘The Queens Head. Harrison and Horton are now in new roles: a couple that have lost their son. George is reluctant to sell up the shop and has a sentimental connection to the building which has been in the family for multiple generations. The multi rolling emphasises the constant change which is an underlying theme throughout the play. There is a breakdown from mum (Joanna Horton) that feels a little strangely placed in the show which takes away from the acting. The tension is as sharp as a knife as Elmone and Clarence face a racist attitude from George. An audience member let out an audible ‘wow’ and the room erupted.

We then travel in time to the future and meet Angus and Esme (this time Blake Harrison and Kirsty Oswald) as a middle-class couple who have purchased the long gone Nine Nights Funeral Directors space and turned it into a trendy wine bar. Archie Maddocks writes in tones of gentrification brilliantly. An older Clarence is invited inside after loitering outside. (David Webber) delivers a heartbreaking monologue as he remembers ‘what used to be’. I felt my heartache with his.

Archie Maddocks covers so much scope in 2.5 hours and I was left reeling for all of the generations that had been and gone in the same space, each in their own way. The multi rolling can be a little difficult to follow but soon makes sense. The cast are brilliant and carry the story with a great pace that keeps the audience on their toes.

I must add the roti upon exiting the theatre space was very welcome as well as the Caribbean music that echoed joyfully across the building.

‘A Place for We’ is a co-production from Talawa Theatre Company and Park Theatre.