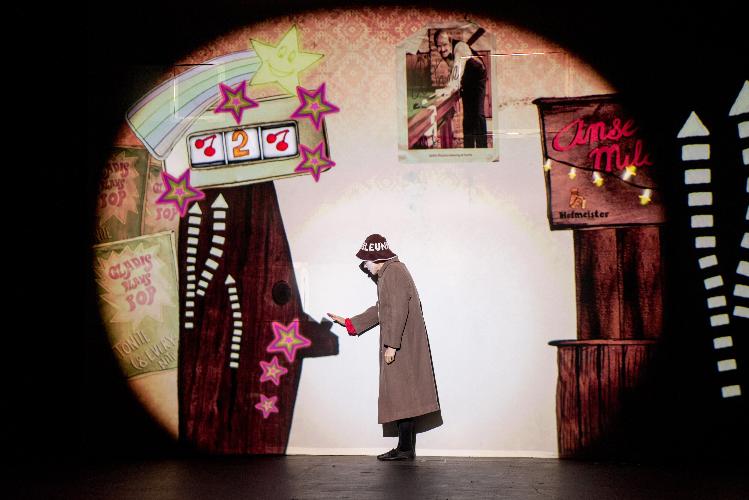 Theatre company 1927 is bringing on another winner with Roots, a collection of morbidly funny short stories, delivered by Dr Mabuse mimes, foley musicians and a whole menagerie of hauntology icons brought to life by their signature usage of carefully timed and choreographed projection art. Combining the graphic styles of David Shrigley, Yoshitomo Nara and Monty Python interludes, charmingly handcrafted black and white animations deliver their morbid array of tales in old school collages, rockabilly and psychedelia. Those visuals are accompanied by voices and sounds from the stage and from the off, from innumerable instruments and as many utensils as you can fit in 70 minutes show time.

As bleak as the reality and/or destiny of each of the folktale-inspired characters are, they have the audience in giggles for most of the evening. Cannibalism, infanticide, blasphemy – we laughed. We meet a megalomaniac cat with a big appetite (okay, which cat isn’t?), unremarkable and unlucky fellows stroke once again by bad luck, competitive ogres, magic birds, a very fashionable ant marrying a very attractive mouse to match her Parisienne chic, learn that poverty is a terrible flatmate and also how to deal with that. But always expect another twist; there are only temporary triumphs but plenty of tyrants.

Charles Perrault’s verse novella Griseldis from 1691 shows how you’d, as a grape-wigged absolute king in a rococo kingdom, test your wife’s loyalty and values, while other stories are transported to more urban, recent surroundings: Here a picture of Tom Jones on the wall, there a shattering appearance of Ronald Reagan.

The tales are of greed, of unthankfulness, of punishment and of getting away with it – grim, but always cheeky in the manner of early Tim Burton films. And because of this you cannot think of a better venue than the historic shabby chic temple Wilton Music Hall is, (also known as London’s worst kept secret), hidden away in Tower Hamlets but walkable on a dry evening from London Bridge. I already wonder in what period drama I will spot its iconic pillars next. And where I’ll come across a Roots tale next as well. I am excited about what happens in Wilton’s next and maybe even more, what the 1927 troupe come up next.

It runs until 30 October.