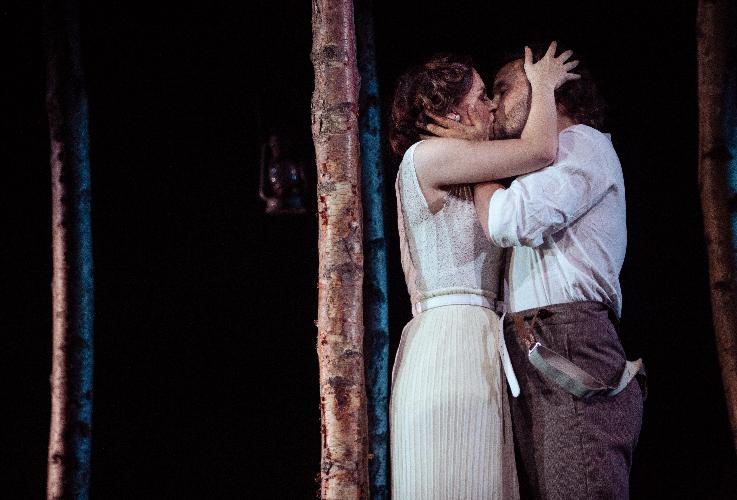 Though there can be no replacement for the wonder of live theatre, the cast and crew of Lady Chatterley’s Lover have done everything they can to make sure that the difference is not felt. This special production follows a short run in London’s Shaftesbury Theatre over the summer, where the stage musical was adapted into film.

Lady Chatterley’s Lover is a new musical adaptation, by Phil Willmott, of D.H. Lawrence’s infamous book that follows Lady Chatterley’s pursuit of love in a loveless marriage and finds such solace with the local groundskeeper. The book was initially banned as a scandalous work of erotica but has subsequently become one of the most cutting-edge novels of its time.

From the first notes sung by the cast, it is evident that this musical is a labour of love from composer, John Robinson. If The Phantom of the Opera and Les Misérables are musicals that evoke emotions in their audiences, this follows in the same vein. With rich classical sounds, and what feels like a full-bodied orchestra, the music in this show aids the romantic feeling that the story promotes.

Compared to how the book was first viewed as tantamount to erotica, director Sasha Regan opts for a more vanilla approach to the somewhat sordid adaptations that have existed before, which makes it pleasant to watch.

The dynamic use of a two-level stage helps the audience to follow the two main stories, but on a deeper level, it is a nod to the division within classes that is a prominent theme in this musical. The musical stylings are also a key in the division of the classes, as displayed through Georgia Lennon’s lighter soprano musings for the upper class, and the guttural and earthy sounds of Michael Pickering as the lower class, with the occasional aspirations to the higher and lighter tones, another hint to the subtext of trying to rise through the ranks.

The entire cast and crew did a brilliant job to bring this musical to life, but Michael Pickering steals the show with his epic performance as Mellors, not only winning over the heart of Lady Chatterley, but of the entire audience in one fell swoop.