A father and a son. A holiday. Thailand. 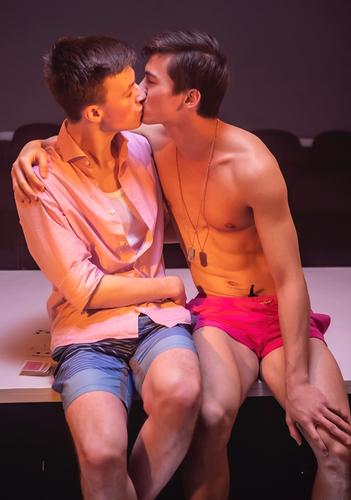 My dad’s gap year (based on true events) is written by Tom Wright and directed by the always excellent Rikki Beadle Blair. It centres on the dad Dave (Adam Lannon), who has recently separated from his wife (an underused Michelle Collins). He spends his days not working, drinking vodka and playing video games. He has an uptight “non-clichéd gay” son called Will (Alex Britt) who is very focused on his career and work. In a blink of an eye, they go together to Thailand on a sort of gap year. Will this help Dave sorting himself out?

Once away in Thailand Dave starts to fall in love with the best character in the show, Mae played by Victoria Gigante. Like Dave, she is also “finding herself” and realizing her dreams of opening a bar on the beach. Their relationship is rather touching. In the meanwhile, Will’s eyes are opened up to the gay life when he meets an architect called Matias (Max Percy), who introduces him to saunas, sex, drugs and clubbing.

From here on, it all starts to meander, flounder and lose focus. Michelle Collins’s role consists of being on the other end of the phone dishing out maternal advice. Dave starts opening up and discussing his past and the reason for his alcohol addiction. And Will starts to go off the rails. All of this in 90 minutes on the most basic of stages: four white office tables pushed together with a hole in the middle where they cast often huddle don’t work very well.

There are too many stories, tangents and arcs, none of them really focused and the end is rushed. Will is a particularly hard character to like: his mum calls him a brat which is very evident throughout. And Dave isn’t particularly likable either. Over time, with some editing there can be a sharper story which could be funnier and way more poignant.

At the moment My dad’s gap year is a scatty muddled tale that isn’t a disaster but definitely not a success. And if the main message was all about finding yourself, I'm not sure any of the characters really did.