The play that went wrong 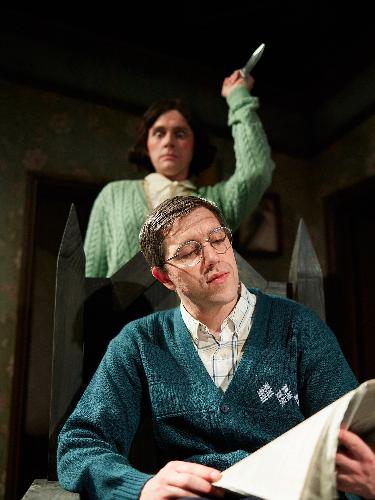 The Killer Question is a show about a former game show champion, Walter Crump, who lives for all things murder, and his wife, Margaret Crump, who is currently under investigation with local law enforcement over his disappearance and probable death. It follows the classic whodunit motif and ends with a twist that has the potential to shock some viewers.

The self-described ‘The Silence of the Lambs meets Last of the Summer Wine’ play by Dave Pane is well written and intricate. It is a fantastic revolutionary idea. However, the tiresome execution of the beautifully written text by the cast leaves you disappointed and frankly, bored.

What starts as a fun interactive segment with the audience, getting them to choose which actors play what characters, descends into a rather convoluted and drawn-out piece of theatrical chaos when the actors assimilate the roles given to them by the audience on one particular night. The ability to be able to remember three sets of lines does not go unnoticed and is usually an incredible feat, but due to the lack of preparedness, thanks to the audience participation, most lines are hurried and don’t land how they are meant to.

Blame cannot simply be placed on the actors, as it is director Alyx Tole’s prerogative to try such an avant-garde approach to theatre, but in this instance, it falls flat. The pacing is all over the place, lines are fluffed when the actors can’t quite remember who says what line and most of the humour is lost in garbled speech or badly timed pauses.

That being said, this concept is wonderfully brilliant, and this was highlighted especially by the ‘Margaret’ of the night, Jake Urry. His ability to save almost every scene with great comedic timing and expressive actions to aid his character’s story greatly helped to save what would otherwise be a lost cause.

All in all, with some refinement, the potential for a great dark comedic thriller is there. The beauty of the thriller genre is to keep your audience guessing and on the edge of their seat. However, through the somewhat over-explaining of the play, views are left dissatisfied by being given the answers on a plate. With some textual edits and a new directive, this show has the potential to be as big as some of the classic whodunits of our time.