Back to the Future - Review - Adelphi Theatre 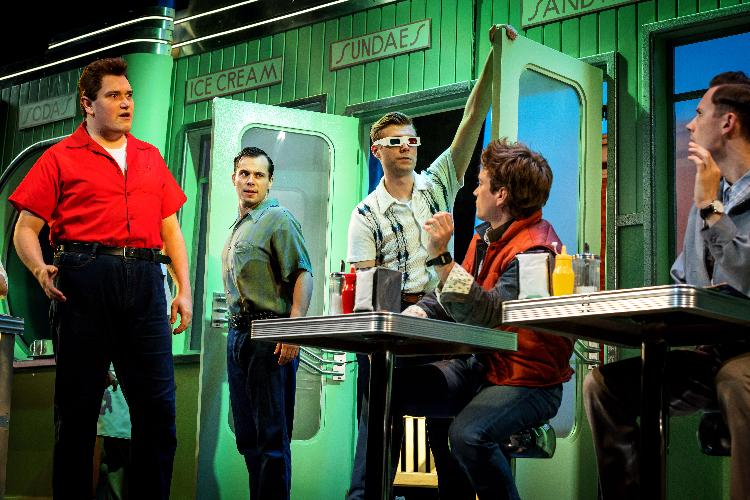 In 1985, a film was released that caused a nuclear reaction of enjoyment to spread across the world, gracing our screens with an eccentric scientist, a teenage boy and an iconic car. And it took the world by storm.

With a fantastic script by Bob Gale, complimented beautifully by Alan Silvestri's stunning soundtrack with the whole thing pulled together under the direction of Robert Zemeckis, Back to the Future came crashing into our lives, inspiring two sequels and now a new musical.

Films made into musicals: it's a hot topic, because the audience has an expectation to 'do the film justice'. And thanks to Gale, Zemeckis and Silvestri all joining forces again, Back to the Future the Musical is nothing short of perfection. This production flawlessly fuses fantastic theatrical craft with clever cinematography to create a wonderful mix of Film and Theatre.

With a fantastic design team working in sync with each other, every aspect of the show works hand in hand to create a visual spectacle that will genuinely blow your mind. The staging, lighting, sound, videography and illusion design team of Tim Hatley, Tim Lutkin, Finn Ross, Gareth Owen and Chris Fisher have created a wonderful theatrical experience that leaves you begging for more.

The new music by Alan Silvestri and Glen Ballard works well to keep the storyline flowing through, whilst still keeping true to the original material. 'It's only a matter of time', 'Put your mind to it' and '21st Century' are particular highlights of the fantastic new musical score, with a standout moment being Roger Bart singing the beautiful ballad 'For the Dreamers'.

Casting for such an iconic piece must be extremely difficult, but BTTF has hit the nail on the head. A very strong ensemble backs up the fantastic lead roles. Roger Bart has managed to create his own version of the loveable Doc Brown, with his fantastic comedic timing and delivers the role with a loving nod towards the iconic Christopher Lloyd. Rosanna Hyland brings the feisty Lorraine to life adding a new dimension to the character, particularly in her first solo number. The role of Marty McFly is performed brilliantly by Olly Dobson. He has all of the presence of Micheal J Fox, with his cheeky character bursting onto the stage, instantly putting any skeptics in the audience at ease with his perfect portrayal. Hugh Coles as the geeky and awkward George has managed to bring every aspect of the father to the stage. There has very obviously been a huge amount of research into this character, and it pays off in abundance with Coles incredibly accurate performance, capturing all of the little 'George' mannerisms from the film.
To talk about the iconic DeLorean without spoilers is nigh on impossible. All that needs to be said about it is Wow!
As mentioned before, every aspect of the show works in total sync to create a theatrical masterpiece showcasing what can be achieved when you 'Put your mind to it'.