The Pleasure Garden - A Vauxhall Musical - Review - Above the Stag

Sunday in the Park with more colourful characters than Clapham 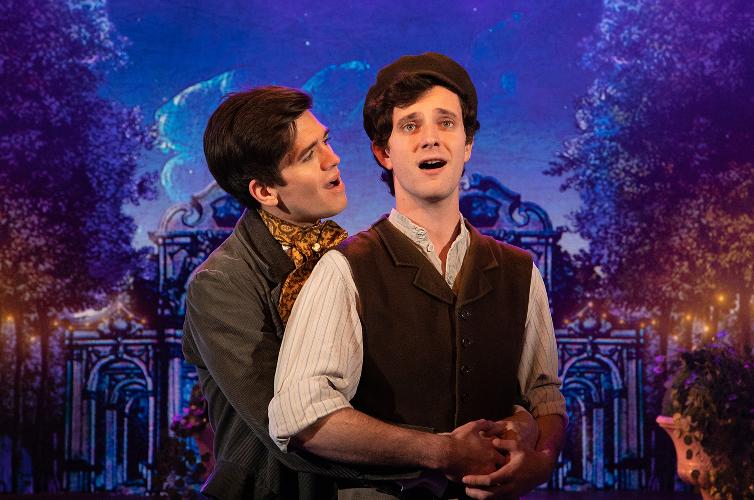 Now that the entertainment industry has found its feet somewhat, is there really any better way to challenge, appall and excite an audience than bringing the Vauxhall pleasure gardens back to life? In the 18th and 19th centuries, Vauxhall Gardens (part art gallery, part fashion show and part brothel) defined the city's nightlife. Glenn Chandler’s musical brings us a taste of this rich cultural explosion of flavour.

Young gardener Tom Restless, played by Sam Baumal, is a coy yet crisp individual, ambitious to defy his working-class roots, dreaming to live amongst the aristocracy upon the hill. His mundane routine of flower arranging and riddled conversations with the gardens’ hermit, played by Steve Watts, is intensely interrupted by a romantic proposition from young shipping clerk Ralph Pottinger, played by Jay Worley. However, sought after Tom Restless finds himself caught quite literally in the cross hairs as his innocent demeanor attracts the attention of a more seasoned sodomite, Lord Roger Lovelock, played by Rory-Charlie Campbell. Campbell’s wife, Lady Maude Lovelock, played by Ashleigh Harvey, secures her husbands sodemy and has her own slice of the pie with various rendezvous such as Captain Antrobus, played by Jennie Jacobs.

Baumal’s portrayal of Tom Restless is charming and endlessly endearing. His youthful energy and gorgeous vocals are a consistent treat. Similarly Worley’s love interest is passionate and playful. Harvey’s Lady Lovelock is a strong highlight. With great vocal control and a clear thought process to her lyrics, Harvey steers through a complete journey of being the sidelined wife from choices never made to the exciting affairs. A special commendation goes to Jonathan Harlaw, completing the ensemble with vigour and precision.

Chandler’s story is intricate and well structured. His experience writing mysterious plotlines and three-dimensional characters gives The Pleasure Garden a captivating imagination. Charles Miller’s composition is unique in style; working alongside Aaron Clingham, Orchestrator & Musical Director, the songs are playful and easy to follow. The writing for a diverse cast of identities and vocal specifics is particularly impressive, such as with Princess Saura, played by Singaporean opera and musical theatre star Bea Amora Wong.

David Shields’ set and costumes are exquisite. The intimate space of Above The Stag exposes every detail and Shields has covered every single one. The complementing colours of the flowers on a backdrop of a grey garden setting with the period couture is perfect for keeping us intrigued.

With a live miniature band providing a great sound, The Pleasure Garden is a unique musical offering a pocket of exciting history not often spoken of. It is definitely worth a watch for the brilliant cast and creatives involved.

It runs until 17 October. Tickets: here.