Belly Up - Review - The Turbine Theatre 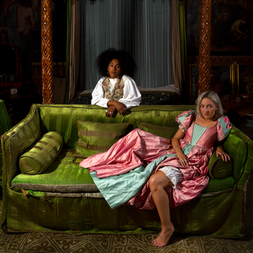 Belly Up, directed by Rachel Lemon, is set in 1790s London exploring the life of a virgin maidservant, Liberty Whitley who, after murdering her abusive master, is sentenced to hang. Faking pregnancy to escape the noose, it’s a race against time before Liberty, played by Julia Grogan, is found out and her chances of survival are gone.

Having achieved a 5-star sell-out run at VAULT Festival (2020), I was expecting more from the show than what I saw. Running for 75 minutes, we follow Liberty on her quest of sex to survive. With original music and outrageous gags, it’s fun, witty, and downright rude. However, the staging and plot development lacked, and the costumes and lighting were typical of an amdram production. The music, composed by Lydia Higman, was the highlight of the show for me, with its smart lyrics and catchy riffs, it helped move the show along and was key to set each scene. Melissa Knighton’s many characters were also cleverly portrayed, with her enactment of the King bringing everyone to tears of laugher. And Michael Bijok showed real talent with the contrasts highlighted across his characters. However, although the show addressed some important issues, it failed to draw me in, and I didn’t find myself invested in the future of any of the characters, or the message it was trying to share. Perhaps this was due to the light-hearted nature of the show; it often felt like I was watching a group of friends messing about rather than a play about systemic issues faced by women.

Situated at the Turbine Theatre, there’s plenty of opportunity for pre-show dinner and drinks along the waterfront by Battersea Power Station and with a trendy and inclusive vibe, it’s the perfect location for anyone wanting to add a comedy show to a night out with friends.