The revival of a comedy of mistaken identities and excruciating misunderstandings 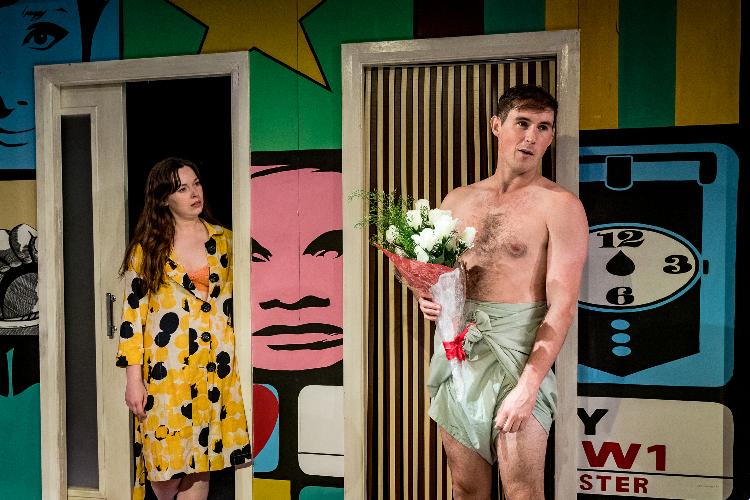 Alan Ayckbourn’s Relatively Speaking is a night of marvelous discourse, mistaken identity and down right debacle.

Directed by Herford, the wonderful cast of four light up Ayckbourn’s story. Greg and Ginny, played by Christopher Bonwell and Lianne Harvey, have a cat and mouse relationship full of mistrust, yet still somewhat slightly endearing. The couple inadvertently end up at Ginny’s ‘parents’ and what follows is plenty of mishaps resulting in a good few laughs.

Bonwell’s Greg is a nervous, skittish young lad. Greg’s lack of experience with women results in a great counterbalance with Ginny, who clearly has something hidden up her sleeve. Bonwell’s boyish energy is charming, his timing with Harvey accurately picks up on Ayckbourn’s quick wit. Similarly, Harvey plays the discourse with Bonwell and the audience whilst keeping her secret hidden with great precision.

A perfect parallel is reflected in Philip and Sheila played by James Simmons and Rachel Fielding, the bickering between the older couple is well met and Herford’s direction clearly shows great stagecraft. Fielding and Bonwell have some brilliant scenes with perfect comic timing whilst Simmons’ reactions to being thrown under the bus are brilliant.

The cast and creatives have worked really well together to bring this brilliant comedy to London audiences. Michael Holt’s design, Natalie Titchener’s costumes and Matthew Biss’ lighting complement one another to create the atmosphere of the ‘60s. Biss’ lighting is particularly effective for a small black box studio rig. In addition, stage manager Catherine Mizrahi and assistant stage manager Morgan Toole swiftly execute the act changes with little distraction.

Relatively Speaking at the Jermyn Street Theatre is a definite pocket of gold dust amongst the great theatres and shows of the west end. The cast are not ‘big TV personalities’, instead they are top quality talented performers who know how to execute Ayckbourn’s brilliant text and genuinely make an intimate room of lucky people laugh for the majority of a few hours.

It runs until 9 October.  Tickets: here.