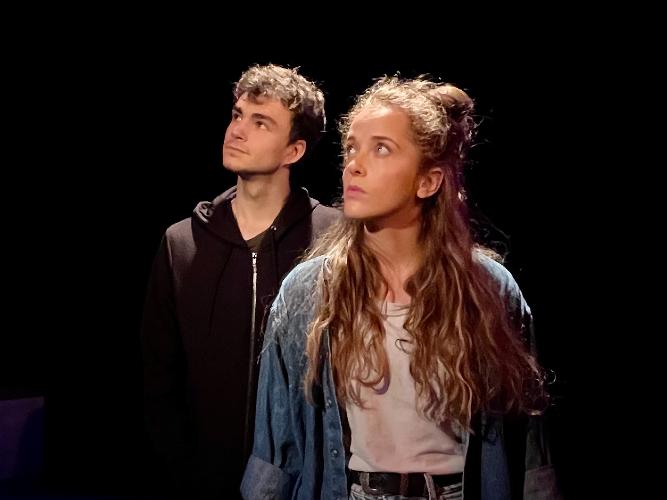 After taking us into two dysfunctional relationships in a huge city like London with “Feel” (2018), this time we are taken to a depressing seaside town, where Callum and Alison (Cal and Alf) live and are friends, or maybe lovers.

Both of them have difficult families: Callum’s mother left him with an abusive father; Alison’s parents were never meant to be together, and when her father leaves the family, instead of love, he gives her money to go for the travel she has always dreamed of. And she finally leaves the small town to go to Thailand, leaving behind Callum with his demons. Callum needs her but is inexplicably attached to a town that has only given him sorrow. He doesn't know how to imagine a different life – when he thinks about his future he can only see black.

The play is performed by two casts, alternating at each performance. For the opening night, Fred Wardale played Callum, and Gabrielle Nellis-Pain played Alison. It's not easy to bring on stage topics like mental health and suicide and not falling into clichés, but “Lately” manages to do it, and this is also thanks to the great performance of the two actors. Fred is the tormented, depressed and troubled Callum, but we see him trying to make sense of his life and navigate through all the adversities, which are bigger than him. Gabriel loves Callum, but she also loves the idea of changing her life, moving to a new place and starting from scratch.

If “Feel” was about London, its tube, cafes', crazy life and neurosis, in “Lately” we are in a decadent and boring seaside town. But, like the characters in “Feel”, Callum and Alison are profoundly alone – they only have each other, and that is how they are supposed to be. But sometimes life – or maybe human nature – takes us away from the people we care about the most. But what happens to them when we are not there?

It runs until 18 September. Tickets: here.