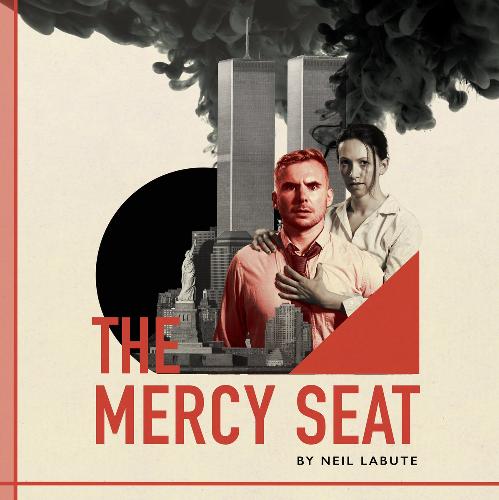 Situated in the intimate Rosemary Branch studio theatre above The Rosemary Branch pub in Islington, ‘The Mercy Seat’ directed by Jack Robertson of Medium Rare Productions 2019, producer of the award-winning stage show ‘Mistress to the Midnight,’ coincides with the 20th anniversary of the 9/11 attacks on New York.

As you walk up the stairs into the quaint studio theatre you feel like you’re stepping back in time. With charming box office staff and the freedom to choose your seats (situated around the stage), you soon realise you are about to experience theatre at its rawest. The staging is simple yet effective, with the lighting doing exactly what it should by creating a close and homely atmosphere for the actors to tell their story.

The entire production pulls you into a back-and-forth moral debate – what kind of person uses a national disaster as a meal ticket to a new life?

Running for 90 minutes, ‘The Mercy Street’ is an intimate revival of Neil LaBute’s gripping drama. You are thrown into the aftermath of the 9/11 attacks on the twin towers, with an adulterous couple debating whether they should use this national tragedy as a meal ticket to a life together – a life they always dreamed of? Should Ben own up and tell his wife the reason he wasn’t in the office when the planes hit was because he was with Abby in her downtown apartment, or could they use this as the opportunity they’ve been waiting for to start a new life together? Madeleine Dunne, who plays Abby, is ballsy, passionate and astute, showing Abby is determined to get an answer from Ben, even if it’s not the answer she’s hoping for. Ben feels more confused, cowardly and boyish, yet because of how Ben Lydon plays him, you can’t help liking him and empathizing with his dilemma. The two actors work well together and take you on a journey where one minute you feel for them, the next you’re cringing from their brashness and unfiltered dialogue. Sometimes on Ben’s side, other times on Abby’s, the staging and direction make you feel like a fly on the wall witnessing something that was only meant for the two of them. And yet in some ways, you can relate; to the comments made by the pair, to your partner knowing how to push your buttons, to the desperation, and to the fear of making a decision that will hurt the people you love and change their lives forever. If you could stop the people you love from hating you, keep your reputation intact and escape to a life you’d love, would you use a national disaster to make it possible? I have to say, initially, I disliked the pair – how could you even be considering such a thing? Yet, thanks to clever direction by Jack, and skilled acting by Madeleine and Ben, I couldn’t help being drawn in, and by the end, I felt sorry for Abby and Ben.

Although skilfully directed, with talented actors, I fear the production’s plot won’t be everyone’s cup-of-tea and some may feel uncomfortable by its intimacy and rawness. That said, if the moral debate and intimate theatre setting is your kind of thing, ‘The Mercy Seat’ is definitely worth your consideration. Plus there’s a lovely pub right downstairs for post-show drinks!