A thought-provoking meditation on the concept of simple living 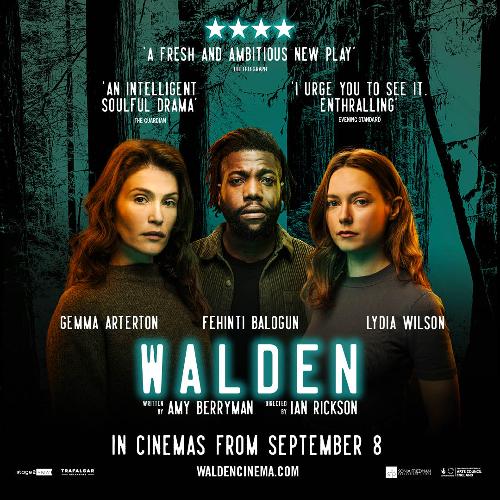 Following its return to West End this summer, a recording of Amy Berryman’s debut play Walden will soon be available in cinemas nationwide. Walden is a modern re-telling of the 1854 Henry David Thoreau magnum opus set in a not-so-distant future in Colorado. It depicts a time where the current climate crisis has reached the point of no return, and as a result, NASA is now working tirelessly to build sustainable colonies in Space for humans to inhabit.

The play centres around Stella (Gemma Arterton), a retired NASA architect, living with her partner Bryan (Fehinti Balogun) in a cabin with minimal electricity, swearing off any modern technology. They invite Stella’s twin sister, Cassie (Lydia Wilson), to stay with them after having recently returned from a one-year mission on the moon working as a botanist for NASA. Events in the past seem to have pitted the two sisters against one another, and, within the confines of the cabin walls, we watch as old wounds re-open and fundamental beliefs are put to the test.

Arterton and Balogun are convincing in the love they share for each other and manage to weave in the complexity of the fact that their political views are diametrically opposed with delicious subtlety. They often have to simply “agree to disagree”, as Bryan is part of an activist group against the very work that Stella used to do. This seems like a deliberate casting choice as Balogun himself takes an active part in the climate change discussion. Deliberate or not, this is an excellent choice. The moments throughout Walden where the characters discuss the solution to the impending climate collapse are some of the play’s strongest, and Balogun’s performance is heartfelt and believable. This is also thanks to writer Amy Berryman, who manages to walk the fine line between explaining and sermonising in these bits of dialogue. Each argument and counter-argument is carefully measured and both feel equally valid, leaving viewers in a position to make up their own minds on the matter.

It can be a difficult feat to elegantly end these long, dialogue-heavy plays, but in spite of signs towards the contrary throughout, Walden actually distinguishes itself with its ending. Having dragged its feet during some passages, the play is held up by strong and emotional performances by Arterton, Wilson and Balogun as well as by its many-faceted exploration of our current climate crisis. In the end, it serves as an elaborate thought experiment asking: is living on Earth a prerequisite of being human?